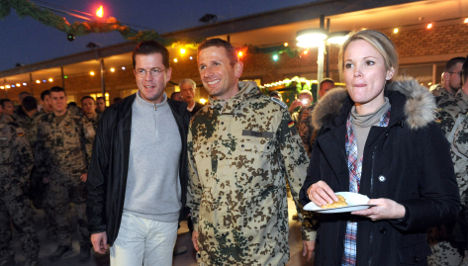 The normally polished and savvy young Christian Social Union (CSU) star was slammed by colleague Elke Hoff, the security policy spokeswoman for coalition partners the Free Democratic Union (FDP) for his pre-Christmas visit to thank the Bundeswehr troops in Afghanistan.

“I would advise the minister to show more restraint and suggest rather that he promptly repair the lingering training and equipment deficits among the troops,” Hoff told the Kölner Stadt-Anzeiger.

“The last thing the troops need now is the presence of a treasured talk show host. That just doesn’t fit,” Hoff said.

The defence spokesman for the centre-left Social Democrats’ (SPD) parliamentary group, Rainer Arnold, told the Passauer Neue Presse said that visiting troops was “in principle always good,” there was no reason for Guttenberg to take his wife Stephanie.

The CSU politician, who consistently rates as Germany’s most popular politician and is seen as a future candidate for Chancellor, was too focused on his media image, Arnold said.

“Guttenberg should rather apply himself to a substantial debate about his reform plan and the Afghanistan mission.”

Hannelore Kraft, the SPD premier of the state of North Rhine-Westphalia, told the Westdeutsche Allgemeine Zeitung: “When politics is staged, it makes people more fed with up politics. This is particularly so when it comes to our soldiers’ dangerous mission in Afghanistan.”

Greens party co-head Claudia Roth called the trip “crude self-promotion” while the left-wing pacifist Die Linke said the minister should have taken to Germany’s 4,600 troops in Afghanistan “orders to come home, not his PR retinue.”

Guttenberg touched down Monday in Mazar-i-Sharif, command headquarters for the northern region, where most of the German soldiers deployed to Afghanistan are stationed, before going to the Kunduz military camp, the defence ministry said.

“I would simply like, before Christmas, to say thank you to the soldiers,” he said when questioned on arrival by German ARD television.