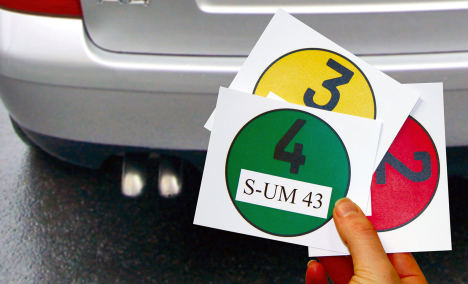 “The environmental zones have not had the desired effect,” ADAC president Peter Meyer told Germany’s Welt am Sonntag newspaper.

So-called Umweltzonen were introduced around the country starting in 2008 in hopes of slashing pollution in densely populated areas. The system requires vehicles to display special red, yellow or green “emissions badges.”

Only automobiles with the proper circular sticker on their windshields get the green-light to navigate streets within the Umweltzonen. Those caught driving without the right emissions badge in green zones are subject to fines and driver’s license point penalties.

But thegreen zone scheme has fallen short of politicians’ and environmentalists’ expectations, according to the paper.

Though Berlin instituted the sticker system early on, some test stations in the city showed an increase in particulate matter measurements in 2010 over the previous year.

Along the Landshuter Allee thoroughfare in Munich, those readings exceeded the maximum safe value on 58 days, compared to 52 days in 2009. Under European Union guidelines established in 2005, levels that exceed the limit are only allowable 35 days of the year.

Meanwhile, safe particulate matter levels were exceeded on more than 90 days on the Neckartor roadway in Stuttgart, despite the presence of a green zone.

Meyer told Welt am Sonntag that the ADAC compared air quality measurements in German cities with and without environmental zones and noticed no major differences.

Restrictions on driving in urban areas have meant that some drivers who keep their cars have had to pay for upgrades to bring them in line with anti-pollution requirements, such as installing catalytic converters or particulate filters.

Just over 36 million of Germany’s 42 million cars meet the standard for a green emissions badge, according to the paper.

Meanwhile, the addition of soot particle filters for buses and trucks has actually led to increased emissions of nitrous gases, and diesel vehicles – which account for about a quarter of the cars in Germany – emit three times the amount of nitrous pollutants compared to other vehicles.

To address that problem, Jürgen Resch, the head of German environmentalist group DUH, called for a new system of blue stickers starting in January of 2012. “The emission of nitrous gases must now be drastically reduced,” he told Welt am Sonntag.

But the Free Democrats’ parliamentary transport policy expert, Patrick Döring, took a critical view of the proposal, saying that the government “could not irritate drivers with yet another sticker.”