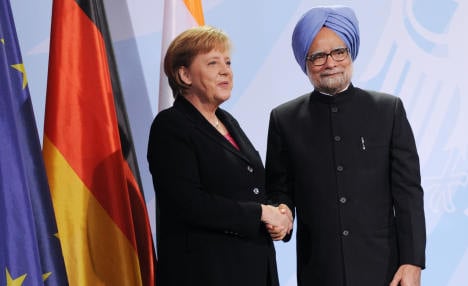 “We have set ourselves ambitious goals,” said German Chancellor Angela Merkel, speaking before a meeting in Berlin. “We want to increase bilateral trade volumes to €20 billion by 2012.”

“We have reached around 13 billion today, which is to say that in the next two years … much needs to be done,” the chancellor added. “But India’s economy is growing, and so I think we can do much to set things in motion.”

For his part, Indian Prime Minister Manmohan Singh said: “Despite the economic downturn, we are hopeful that the target of €20 billion by 2012 will be achieved.”

He added that there is “vast untapped potential for high-technology trade between India and Germany,” which is the world’s second-largest exporter after China.

Singh was visiting Berlin following the 11th EU-India summit in Brussels on Friday, during which both sides announced a near-breakthrough in four years of stalled talks to produce a Free Trade Agreement (FTA).

European Union President Herman Van Rompuy said that “momentum” had been created for what he termed “an ambitious and balanced conclusion in the spring of 2011” of a deal between nations representing 1.5 billion people.

Merkel said that “major progress” had been achieved towards making the FTA a reality.

“Both sides have to take a step in the direction of each other,” she said. “Everyone has to be ready to compromise. This is true for Europe, and it is true for India.”

The two sides have squabbled over EU moves to square the trade deal with European legislation on child labour and the environment, which India says has nothing to do with trade.

Turning to the crisis afflicting the euro, Singh said he was “fully confident that … whatever problems face the eurozone, it will emerge unscathed.”

“The eurozone makes a very important contribution to world stability and progress, and it is in the interest of the world that the eurozone should prosper,” added the prime minister.

Both leaders also reiterated their campaign for a permanent seat on the United Nations Security Council.

Elected in October – along with India, South Africa, Portugal and Colombia – for a two-year stint as a non-permanent Council member, Berlin has long lobbied for permanent status.

India’s own bid is backed by no less an authority than US President Barack Obama. Japan and Brazil have also expressed interest in joining.

“India and Germany will try to advance reform of the UN in such a way … that a permanent seat for both our countries becomes a reality,” Merkel said.

The two leaders also announced that Merkel would visit India next year to mark 60 years of diplomatic relations between the two countries.