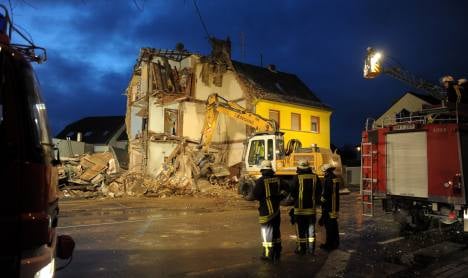 Rescue teams combing through the rubble of the collapsed duplex uncovered the bodies of an adult man and woman earlier on Sunday. Hours later, search dogs found the body of a young girl.

According to German news agency DAPD, the victims’ identities had yet to be confirmed, but the three are assumed to be the father and 10-year-old sister of the boy found alive, as well as the father’s female partner.

Rescue teams were able to dig the 12-year-old boy out of the debris using their hands not long after the house collapsed around 6:30 p.m. on Saturday.

His brother, 15, was not at home when the explosion occurred.

The source of the explosion was still unclear, though an inspector ruled out construction defects or material fatigue as potential causes. Witnesses reported hearing a loud bang, and neighbors said the house had already collapsed by the time they looked out their window to see what had occurred.

The fire department said approximately two-thirds of the building collapsed following the explosion. The three-story half of the duplex building, where the family was living, was destroyed, while the other two-story portion of the building was still standing.

On Sunday afternoon, rescue crews tore down remaining parts of the building to prevent them from collapsing during the search effort. Earlier, teams had been removing the rubble layer by layer and using dogs to scour the area.