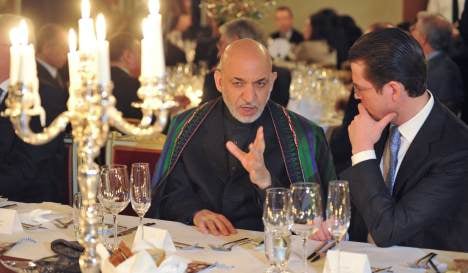 “Progress in the area of good government leadership is still small,” the report read, according to German daily Süddeutsche Zeitung.

The assessment is the first comprehensive progress report to be released by the German government on the situation in Afghanistan. Parliamentarians demanded the review ahead of a coming vote on extending the military mandate, a decision that is expected to take place in January.

On Thursday, German Foreign Minister Guido Westerwelle is set to issue a government statement that makes the case for an extension of the Bundeswehr’s Afghanistan mission.

The approximately 100-page report references ongoing corruption in Afghanistan, as well as an appeal to the government there to fulfil its responsibilities.

It addresses 27 different subject areas and was produced under the direction of the foreign ministry, with contributions from the Chancellery and the defence, justice and development ministries.

Westerwelle reportedly called for a “blunt and honest survey” of the situation, the Süddeutsche Zeitung said.

The newspaper cited government sources, who said the report maintains that the conflict in Afghanistan cannot be won by military means – necessitating talks with members of the insurgency. Yet the assessment also references certain non-negotiable issues, among them women’s rights.

Though Afghanistan is still one of the poorest countries in the world, the document points to economic development and improvements in exports, coal production and per capita income.

Some 100 officials helped prepare the report, including staff in Kabul and members of reconstruction teams in Afghanistan.

As of Friday, the final version of the document was still being prepared, according to the Süddeutsche Zeitung.