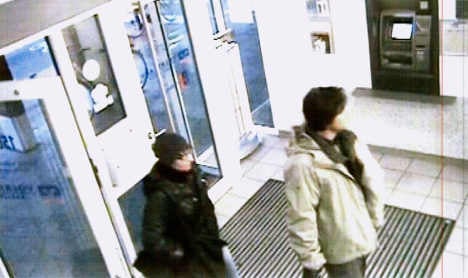 Investigators must wait for the results of DNA testing to confirm whether the Czech married couple involved in Friday’s robbery match that profile.

The alarm at the bank in central Karlsruhe was sounded around 4 p.m. on Friday afternoon. After leaving the building, the robbers were intercepted by police about 30 meters from the bank. The pair immediately opened fire.

Police shot and killed one of the robbers, a 40-year-old man. The injuries sustained by his female accomplice, 38, indicated a probable suicide.

“The bullet likely penetrated through the mouth,” an investigator said.

A 28-year old female police officer was injured in the shoot-out, but police said her condition was not life-threatening. No bystanders were hurt.

Head of police Roland Lay said the duo, who were armed with pistols and wearing wigs, glasses and caps, were likely surprised to see that customers were still in the bank when they arrived.

The pair had been staying at a nearby hotel, and both robbers were carrying identification at the time of the botched hold-up.

The “Gentlemen Robbers” got their nickname after the pair apologised during one of their earlier robberies. They also reportedly returned the car keys of a getaway vehicle to their rightful owner.

But police said the tag was a misnomer and “in no way” justified. “The perpetrators never left any doubt that they would use their weapons,” the spokesman said.

Investigators believe the Friday hold-up was the 21st by the “Gentlemen Robbers,” who according to the federal criminal police (BKA) wanted list had committed 20 robberies at banks in the German states of Rhineland-Palatinate and Baden-Württemberg.

Their last known operation took place on July 13 at another bank in Karlsruhe.