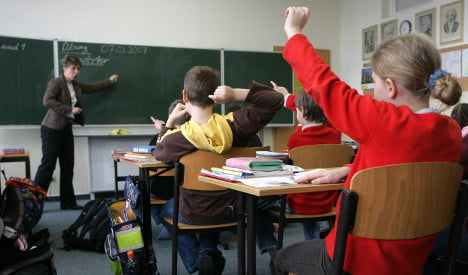 With the PISA study showing on Tuesday that Germany had made slight gains but still lagged world education leaders, the centre-left Social Democrats (SPD) and environmentalist Greens both demanded an overhaul to the system.

They called for a wide-ranging and mandatory all-day school system and the abolition of the current co-operation ban that largely prevents the federal government giving special financial help to the states for education.

“All-day schools, even for primary schools, should be widely introduced and become the standard,” Greens leader Cem Özdemir told the Rheinische Post.

German school days at present generally run from 7:30 am or 8 am until noon or 1 pm.

The latest Programme for International Student Assessment (PISA), the world’s largest standardised educational test, showed that German students’ scores for maths and sciences were slightly above the average for OECD countries but still lagged behind the world’s top performers in Finland and South Korea, who tested one to two grade levels ahead.

Özdemir said the co-operation ban had to be scrapped so that the federal government, the states and municipalities could work closely together to improve the system.

The parliamentary leader of the SPD, Thomas Opperman, told the Rheinische Post: “With previous efforts, Germany has failed to do better than average. We need all-day schools as the standard, from primary schools through to high school graduation.”

He also called for the states to be helped by federal money in setting up a “national all-day school programme.”

“For such a programme, we need to mobilise billions.”

“It is a stumbling block on the road to an education republic,” he told daily Tagesspiegel.

“The question of who starts a teacher training course at a German university is decided too much by chance,” he said.

Rather Germany had to lay down strict entry criteria and offer comprehensive guidance before young people took on study to be a teacher.

“Secondly, we’ve undervalued the importance of internships in schools during study,” he said.

It was also important that universities compete openly for the best teacher training students.

“We have to develop learning strategies with whose help we can strengthen interest in reading, especially among boys.”