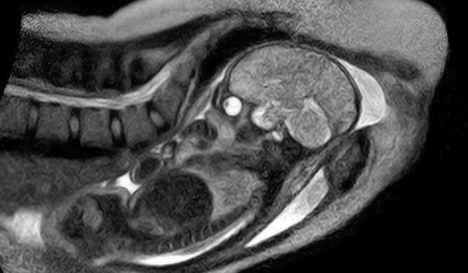 A team comprised of obstetricians, radiologists and engineers have built an “open” MRI scanner that allows a mother-to-be to fit fully into the machine and give birth there, the hospital announced on Tuesday.

The MRI (magnetic resonance imaging) scanner has already taken unique images of the body of a mother and the movement of her baby through the birth canal to the point where its head emerges into the world. The birth that took place in the scanner went smoothly and both mother and baby were in good health, a hospital spokeswoman said.

The birth was the culmination of a two-year project by the research team. MRI uses powerful magnets to magnetise some atoms in the body which makes them detectable to radio waves. Importantly, it can make cross-section images of a subject, showing intricate detail of soft tissue and bones in the body.

The team built a special “open MRI” scanner, a new type of machine whose open structure had the necessary space for the mother to give birth.

The new machine will enable the researchers to study in greater detail how the baby moves through the mother’s pelvis and down the birth canal – issues that have long been studied and debated. The hospital’s Institute for Radiology and Obstetrics Clinic will work closely together on the project.

Among other benefits, it should help researchers to understand why about 15 percent of pregnant women need a Caesarian section because the baby does not progress properly into the birth canal.