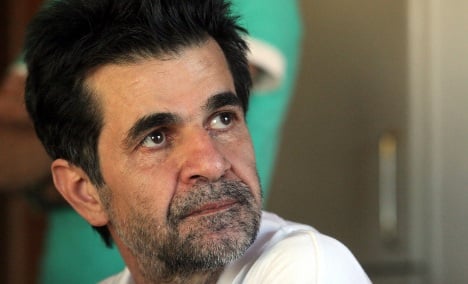 “We hope Jafar Panahi will be able to attend the festival and perform this important task on the international jury of the 61st Berlinale,” the event’s director Dieter Kosslick said in a statement on Monday.

Panahi, 50, went on a hunger strike to protest the conditions of his detention after his March 1 arrest and was released from Tehran’s Evin prison on May 25 after posting bail of two billion rials (around $200,000).

A vocal backer of Iran’s opposition movement, Panahi was arrested at his home along with 16 other people, including his wife and daughter. Most were subsequently released.

The charges against Panahi were not announced.

But Culture Minister Mohammad Hosseini said in April that he was detained for making an “anti-regime” film about the unrest that rocked Iran after last year’s disputed re-election of hardline President Mahmoud Ahmadinejad.

His imprisonment sparked petitions from dozens of cinema figures inside and outside Iran signed by leading directors including Robert Redford, Steven Spielberg, Michael Moore and Oliver Stone.

In February the Iranian authorities banned Panahi from leaving the country to attend the 2010 edition of the Berlin Film Festival.

Cannes then invited Panahi to join its own jury in May, while he was still in prison.

Headed by “Alice in Wonderland” director Tim Burton, the panel called for his release and left a seat symbolically empty for him on stage at the festival’s red-carpet gala opening.

Despite his release, Iranian authorities have refused to return Panahi’s passport and he was unable to attend the Venice Film Festival in September to present his short film “The Accordion” on the opening day.

Panahi, who has been unable to make a feature film in five years, told AFP in an interview in September that he did not understand why he should face a travel ban.

“When a filmmaker does not make films it is as if he is jailed. Even when he is freed from the small jail, he finds himself wandering in a larger jail,” he said.

Panahi is known for his gritty, socially critical movies such as “The Circle,” which captured the 2000 Venice Golden Lion award, “Crimson Gold” and “Offside,” winner of the 2006 Silver Bear in Berlin.

Italian-American actress and director Isabella Rossellini will chair the international jury at the Berlin Film Festival, one of Europe’s top cinema showcases, from February 10 to 20.

The panel selects the winners of the Golden and Silver Bear top prizes.