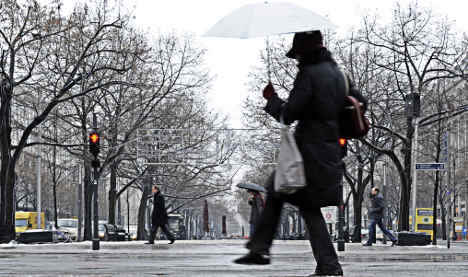 Warmer temperatures on Saturday night will mean that precipitation will fall as rain rather than snow, but will freeze when it hits the ground, covering it with ice.

Central Germany and the furthest western regions will be most at danger from such conditions, the Deutsche Wetterdienst (DWD) said on Saturday, but added that it was difficult to foresee exactly where black ice would strike.

The chilliest place in the country on Saturday morning was Sohland in Saxony, where the temperature dropped to minus 23 degrees, while in Dachwig, Thuringia, things were not much warmer with minus 19 degrees.

The only place in the country to remain at only around zero was the North Sea island of Helgoland, the DWD reported.

Yet things will warm up over the next few days, according to meteorologist Bernd Zeuschner. “Lowest temperatures of less than minus 10 degrees will only be expected in the southwest,” he said. “Otherwise it will remain clearly milder than in the last few nights.”

Train services were badly affected by the sudden snowfall, with central German areas hit by delays and cancellations. The ICE route between Nuremberg and Leipzig was particularly badly affected with one stretch remaining impassable due to snow loads on trees and iced-up overhead cables.

Teams were out over the last few days cutting down trees which were threatening to fall onto train tracks due to the snow and ice. It is not yet known when the main connection between Berlin and Munich will be reopened, the Deutsche Bahn said.

The first death due to the cold was registered on Saturday in Querfurt near Halle after a 62-year-old man was found in a snow drift dying of hyperthermia, the Tagesspiegel reported.

It is not yet clear what happened to the man, who was not homeless, leading police to suspect he had fallen and not been able to get up, eventually falling victim to the cold.

The man was conscious when found on the pavement by a man sweeping up snow, but died later in hospital.