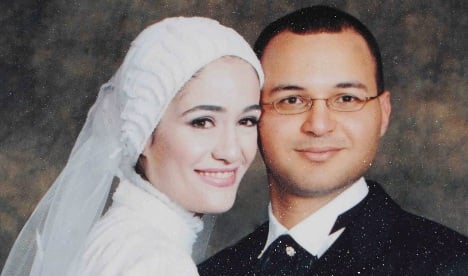 Marwa El-Sherbini, dubbed the “veil martyr,” was stabbed to death in a courtroom in July 2009 in a racially motivated crime that outraged the Muslim world.

The 31-year-old was stabbed by Russian-born Alex Wiens at least 16 times with an 18-centimetre kitchen knife. She was three-months pregnant with her second child. Her three-year-old son, Mustafa, watched her bleed to death in the courtroom.

Sherbini’s husband, Egyptian geneticist Elwy Okaz, rushed to her aid but was also stabbed and then shot in the leg by a police officer who was unsure who was the attacker.

Wiens said he was acting out of revenge after El-Sherbini, who wore a headscarf, had pressed charges against him for calling her a “terrorist,” “Islamist” and “whore” during a dispute over a playground swing in August 2008.

He confessed to the crime during his trial, which resulted in a life sentence.

Sherbini’s family has now filed a case, called a Klageerzwingungsverfahren in German, to force the higher regional court to review their accusations against the court officials present the day of the murder, who they say did not properly insure her safety.

During Wiens’ trial, Sherbini’s husband Okaz complained of insufficient security measures in the courtroom. He also filed a criminal complaint against the court for negligent homicide.

Despite knowledge of Wiens’ “criminal intent” there had been no special security arranged, one of the family’s lawyers said at the time. But state prosecutors dropped the case, saying it lacked evidence.

Courts in Saxony have increased security measures since the murder as a result of the tragic murder.

The family’s latest case to force further review is unlikely to be addressed before the new year, court spokeswoman Karin Haller said.