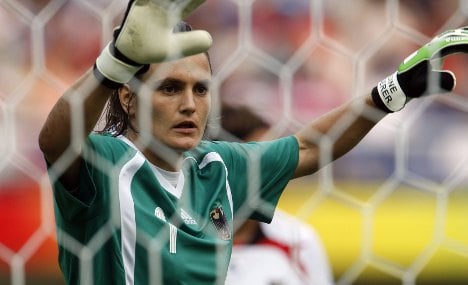 The 32-year-old, who has won 94 caps for Germany and was part of the teams which won both the Women’s World Cup in China in 2007 and in the USA in 2003, told Die Zeit she has no preference when it comes to dating men or women.

“I am very open about this, because I am of the opinion there are nice guys and nice women,” said the Frankfurt goalkeeper. Besides, I find it totally silly to have a general definition.”

While homosexuality in men’s football is still a taboo subject, it is discussed far more openly in the women’s game.

Germany’s reserve goalkeeper Ursula Holl made no secret of her marriage to her girlfriend last summer.

“They would play as if they had been liberated,” Gomez said. “Being gay should no longer be a taboo topic.”

Angerer’s coming-out may surprise some fans in football-mad Germany, but she told German daily Bild she had no problems revealing her bisexuality.

“I see no problem for me to come out of the closet,” she said, adding she had spent 14 years with the national side.

“This is nothing new for me, so I can deal with the issue in a totally relaxed manner.”

It is rare for any high-profile athlete to admit their sexual orientation, but Angerer says she did not have to pluck up any courage before her declaration.

“I do not know if you need a special kind of courage. I am someone who is generally opposed to stereotyped thinking,” she said.

But she refused to be drawn when asked about whom she is currently dating.

“That is not interesting to anyone,” she said.

Having guarded Germany’s goal for the last two successful World Cup campaigns, Angerer is looking to write her name in football history by winning a third world title.