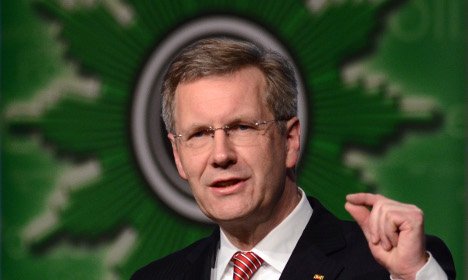 Wulff’s office approved the application for the honour, but the local official in Krakow am See, conservative Christian Democrat Wilfried Baldermann, refused to present it to them as is customary, the paper said.

Baldermann has the support of other regional politicians, including the centre-left Social Democrats in the state parliament in Schwerin, who want Wulff to revoke the presidential sponsorship.

“These parents are clearly in the far-right extremist scene,” parliamentary party group leader Norbert Nieszery wrote to the president in a letter.

The father is a functionary at a “eugenics institute” with ties to the neo-Nazi NPD party, while the mother belongs to far-right women’s organisation, which should disqualify them for the special recognition, he said.

“These people have one top political goal – the overthrow of the democratic government,” he added, saying they could misuse the honour as a federal seal of approval on their agenda.

Dietmar Bartsch, deputy leader of the socialist Left party’s state parliamentary group said the community official had been “totally right” to withhold the certificate from the family, but insisted their child should still receive the €500 gift that comes with it.

“One can’t punish the child because its parents are right-wing radicals,” he told the paper.

But Wulff’s office decided on Wednesday to send the certificate by post and wire the money directly to the family.

“The child is at the centre of this,” the president’s office said, explaining that the honour was not for the parents.

Everyone is, however, encouraged to “ensure an atmosphere where children are raised to respect democracy.”