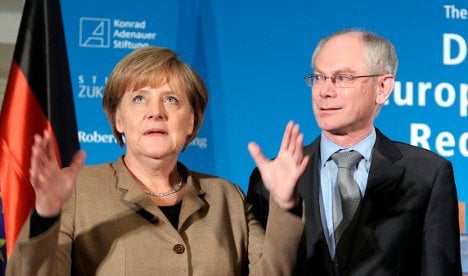 “The rest of Europe increasingly resents German policy and fears the emergence of a nationalist Germany,” warned Ulrike Guérot of the European Council on Foreign Relations (ECFR), a think tank.

Tensions have worsened as the debt crisis threatens more eurozone countries, Portugal after Ireland with Spain appearing next in line.

And German Chancellor Angela Merkel has been blamed for spooking the bonds markets by insisting that private lenders contribute to future rescue packages.

Jean-Claude Juncker, the normally German-friendly premier of Luxembourg, has fretted publicly that Berlin is “slowly losing sight of the common European good.”

In Spain, “the prevailing feeling is one of frustration with Germany,” wrote the ECFR head of office in Madrid, Jose Ignacio Torreblanca, in the Financial Times.

Spain fears that “Ms Merkel’s proposal to have investors, and not only citizens, suffer the consequences of their investment decisions” is driving up its borrowing costs and endangering its recovery plan.

The editor-in-chief of the German daily Handelsblatt, Gabor Steingart, has accused Merkel of “being strong against the weak. Her policies lead to insecurity and strife,” he charged in a front-page editorial.

And Der Spiegel claimed in its edition this week that “Germany’s reputation in the EU has deteriorated dramatically.”

Berlin’s minister for European affairs Werner Hoyer told the weekly magazine that he is frequently asked by his colleagues in Brussels: “Do you still stand by Europe?”

“Strategically, what we’re doing is right, but we have a communication problem,” Hoyer said.

Germany has not turned anti-European, Almut Möller of the German Council on Foreign Relations (DGAP) told news agency AFP, but “the government’s communication strategy hasn’t always been sensible and it has often reacted too late.”

She wondered if Merkel and her advisers “are aware of the frustrations they create.” And she deplored that when confronted with their partners’ views, “the Germans react to every criticism without any tact, out of the moral conviction that they are in the right.”

“Germans are not ready to question themselves,” agreed Ulrike Guérot.

The Foreign Ministry has prepared a policy paper urging the government to remedy its image deficit and explain its policies.

“They have realised that the crisis has brought back old cliches,” commented a diplomat who insisted on anonymity. “The spectre of an ever-more-demanding Germany is being raised in a number of countries.”

“And that explains why Berlin is trying to coordinate its positions with France,” which can provide some kind of cover, he said.

But for Guérot the problem goes deeper. She sees a Germany that has “fallen out of love with Europe,” which has become more complicated, too tiresome and too expensive.

“Germany is now simply older and poorer, with social tensions that its neighbours do not see because it likes to celebrate itself as an export champion.”

“For most of Europe, Germany is the big winner of the euro … whereas many Germans today believe that they have always had to pay for the others and have always been cheated,” she added.

Germany is no longer ready to pay for each and every compromise and “this is legitimate,” she insisted.

But the rest of Europe has yet to get used it and Berlin’s attitude isn’t helping.

“The current German tone tends to be too sharp and is therefore inappropriate,” she said.