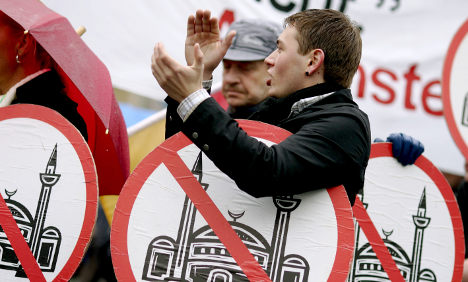 Despite the other European countries’ often fractious relationships with their Muslim communities, people there were relatively positive about Islam and its followers compared to Germany, according to the survey commissioned by a research group based at the University of Münster.

According to weekly Die Zeit, which reported on an advance version of the study on Thursday, four out of 10 Germans in the former west of the country and 50 percent in the former east feel threatened by foreign cultures.

“Compared with the French, Dutch and Danish, a rigid and intolerant grasp of foreign religions predominates in Germany,” said the head of the project, sociologist Detlef Pollack. “The statement that Islam is part of Germany is completely disregarded in the opinions of Germans.”

The polling firm TNS Emnid, on behalf of the Münster researchers, surveyed 1,000 people each in the former west and former east Germany, France, Denmark, the Netherlands and Portugal. The study will be officially released later on Thursday in Berlin.

Fewer than 5 percent of Germans, compared with more than 20 percent of Danes, French and Dutch consider Islam to be a tolerant religion, according to the study.

Each of the other countries has had high-profile conflict with their Muslim communities – such as the Prophet Mohammed cartoons in Denmark, head scarf controversies in France and the murder of anti-Islam filmmaker Theo van Gogh in the Netherlands, as well as the rise of far-right politician Geert Wilders.

Most Germans saw barely any positive side to Islam, Pollack said. Less than 30 percent in the former west supported the building of mosques, while in the former east the figure was less than 20 percent. The acceptance of minarets or the adoption of Muslim holidays received even less support.

In Denmark, by comparison, more than half of respondents supported the building of mosques, while in France and the Netherlands the figure was about two-thirds and in Portugal it was nearly three quarters.