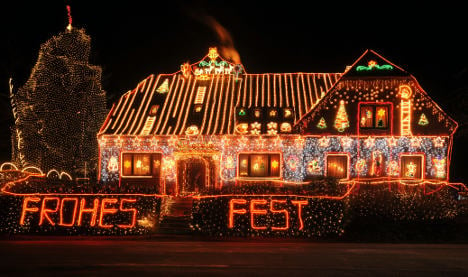 “There are 20,000 more than last year,” said David Vogt, explaining that only a lack of funds stopped the family from hitting their original target of 500,000 lights.

The house is festooned with luminous reindeer, sledges, and snowmen, but the extra-special feature is a sixteen metre high silver Christmas tree. The 30-year-old Vogt boasted that the centrepiece supports twice as many lights as previously.

He also explained how the family managed to keep adding sparkle to the already packed roof of their house by switching from plastic tubing to chains.

After decorating their house for the holidays for several years, the Vogt’s recently made the switch to energy-saving LED bulbs in order to cut down on electricity. Last Christmas they ended up with a €3,000 bill for their impressive Yuletide display.

Preparations began this year in June, when the first string of lights went up, and the house was lit up last Saturday.

The spectacle will be turned on daily between around 5 pm and 9 pm through New Years Eve, when the grand switch-off will be marked by fireworks.

The family’s extravagant decorations were inspired by a trip to America in 1999, when Vogt and his father, who is also named David, returned with suitcases full of decorations. What started out as just a few lights strung on the bushes and trees surrounding their house has developed into a local event, attracting visitors from the town and beyond.

“Last weekend the guests filled two large tents,” said Vogt. A small Christmas market next to the house, complete with a mini-carousel for visiting children to play on, helps to defray the hefty power costs. Guests will be able to get their fill of bratwurst, crepes and traditional Glühwein.

The family have announced that they are already planning their light display for Christmas 2011. Featuring even more lights than this year, the Vogts intend to remain Germany’s premier holiday decoration destination.