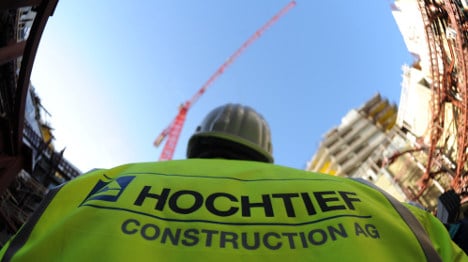 Hochtief’s management has said that the offer undervalues Germany’s biggest construction firm. In spite of this, it has stopped short of publicly declaring the bid hostile.

ACS already owns a stake of just under 30 percent in Hochtief, which in turn controls Australia’s Leighton, and plans to offer eight of its shares for every five of those in Hochtief.

Germany’s financial regulator, Bafin, said late Monday that ACS’s offer was in accordance with German takeover law, although according to a statement, the Spanish firm had to make “significant improvements” to the bid.

The official bid acceptance period will begin once ACS publishes its offer, expected in early December. From then, Hochtief shareholders have four weeks to decide whether they wish to accept the offer.

ACS said in September it aimed to launch its all-share bid for the 70 percent of Hochtief that it currently doesn’t own. But it added that it aimed only to increase its stake to slightly above 50 percent, in order to consolidate Hochtief on its balance sheet.

In an attempt to stymie the deal and provide a “poison pill” for the Spanish, Hochtief applied to Australian regulators to force ACS to make a separate and expansive offer to buy Leighton in a separate additional deal.

However, Australia’s Takeover Panel rejected the request, and on Monday turned down an appeal by the German firm.