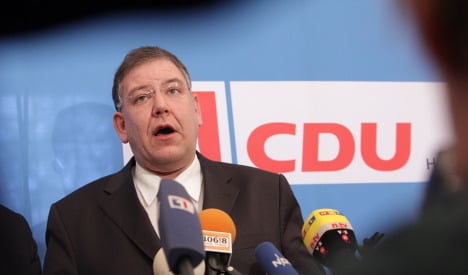 The government between the conservative Christian Democrats (CDU) and the environmentalist Greens will be formally dissolved on December 15.

The Hamburg-based Green Alternative List (GAL), which is incorporated into the federal Green party, announced their decision on Sunday to tear up the coalition contract barely three months after Christian Democrat Christoph Ahlhaus was chosen as the mayor of the northern city-state.

Inter-party relations in the government have been strained since former CDU Mayor Ole von Beust announced he was stepping down in July. The hugely popular Beust – who had governed Hamburg since 2001 – was widely seen as the guarantor of the unlikely coalition.

The alliance, which has been in power since 2008, was also seen as an experimental partnership for two parties traditionally opposed to one another.

Many GAL members had wanted to abandon the coalition following Beust’s exit, but in the summer the party narrowly voted to support Ahlhaus as mayor.

On Monday Ahlhaus, who remains the CDU’s candidate to lead the city, said he was optimistic about the upcoming election.

“In the coming months ahead of the election the CDU can show what our policies are without the coalition stumbling block, and I’m not at all worried about the new vote,” he told broadcaster ZDF.

Ahlhaus also had harsh words for the GAL, who he said had dissolved the coalition in a power play resulting from the Greens’ increasing popularity across the country in recent polls.

“Calculating to flee into the opposition to gain a better starting position in new elections is unfair to the citizens,” he said, accusing the GAL of walking away from their responsibilities in favour of a more “comfortable path.”

He also warned that the party would likely pay for their choice in the end.

According to Ahlhaus, the GAL’s decision came as a complete surprise.

“There were no clues, not even at the end of last week, that we were facing the end,” he said.

The GAL said its main reason for ending the coalition was last week’s resignation by Hamburg’s CDU Finance Minister Carsten Frigge following allegations of misusing party funds in the state of Rhineland-Palatinate. The CDU allegedly did not consult with their junior coalition partners about Frigge’s replacement, among other things.

GAL party chairwoman Katharina Fegebank said Sunday she saw no chance of a new beginning, and that a new election was the only honest offer they could make to the people of Hamburg. Parliamentary faction head Jens Kerstan said there was no more trust and reliability in the coalition.

Meanwhile leader of the Green party’s federal parliamentary group, Jürgen Trittin, declared the experiment to create a CDU-Greens coalition to be over.

“In many areas the conflicts are intensifying,” he told daily Berliner Zeitung, referring to nuclear and environmental policies in particular.

But Green party co-leader Cem Özdemir said he still saw chances for the two parties to work together on a state level.

“In Hamburg we saw the consequence of the growing inability to govern by Mr. Ahlhaus’ CDU,” he told the Hamburger Abendblatt. “But I believe it is inappropriate to use this as an example in the rest of the country.”