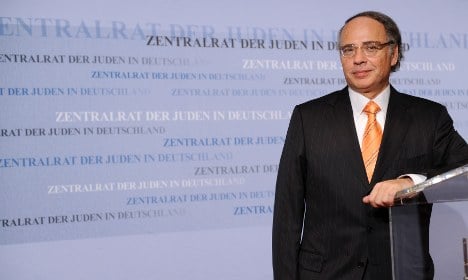 Dieter Graumann, vice president of the Central Council of Jews, Germany’s main Jewish organisation with nearly 110,000 members, was the sole candidate to replace 78-year-old Charlotte Knobloch, who did not stand for re-election over the weekend.

Born in Israel in 1950 and raised in Frankfurt, Graumann said he wanted to let in a little “fresh air” to the council with an approach that served both old members and the new arrivals.

“We are building a whole new Jewish community,” he told reporters after his election. “Plurality is the new Jewish reality.”

Graumann said the council must evolve to grapple with the breathtaking transformation of the community since Germany threw open its borders to Jews from the ex-Soviet Union after the fall of the Berlin Wall 21 years ago.

“We stand before major challenges,” he said. “We want to make the Central Council fit for the future.”

Before 1933, Germany had one of Europe’s strongest Jewish communities with about 600,000 members.

Since 1989, when there were about 30,000 Jews living in Germany, some 220,000 Jews have arrived from the former Soviet Union. In the early 1990s, more Jews were immigrating to Germany than to Israel.

Graumann arrived in Germany at the age of 18 months. His experience of the Nazis’ genocidal campaign was limited to his parents’ accounts of the concentration camps where they were imprisoned.

“My generation always had the feeling it could not burden its parents too much,” he told the daily Süddeutsche Zeitung in its weekend edition.

Knobloch faced criticism that she did not do enough to assist the newcomers, many of whom spoke no German when they arrived and are less observant of Jewish theology, and make the council attractive to its diverse constituency.

But Foreign Minister Guido Westerwelle praised her efforts in a letter congratulating Graumann on his election.

“(The council) is an outstanding institution whose absence would be inconceivable in public life,” he said. “It has made an invaluable contribution in the areas of integration, education and the peaceful co-existence of religions.”

The outgoing leader was born just months before Adolf Hitler rose to power in January 1933 and survived the Holocaust in hiding with a Roman Catholic family.

Knobloch, who had led the council since 2006, said she was confident Graumann would help keep the memory of the Holocaust alive.

“He did not experience the horrors of National Socialism himself but he grew up with the stories of his parents,” she told Saturday’s Augsburger Allgemeine newspaper. “That is why I do not see this (his election) as a break with the past.”

She said she hoped Graumann could motivate the younger generation to become active members of the Jewish community and the German political scene.

“Young people must urgently help shape the political future of their country because they have every reason to treasure this country, to honour this country and even to love this country,” Knobloch said.