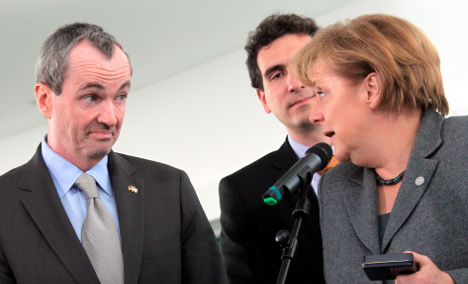 Merkel and US Ambassador Murphy in March 2010. Photo: DPA

In a message attributed to a US diplomat in Berlin dated March 24, 2009, the State Department is told that Merkel is “risk averse and rarely creative,” Der Spiegel reported on Sunday.

“The Americans argue that the chancellor views international diplomacy above all from the perspective of how she can profit from it domestically,” the magazine wrote.

Merkel’s vice-chancellor and foreign minister, Guido Westerwelle, comes in for harsher criticism in the secret documents and is described as incompetent, vain and critical of America, the magazine said.

An embassy cable from Berlin from September 22, 2009, days before the general election that put him in office, describes Westerwelle as having an “exuberant personality” but little foreign policy experience.

“That is why he finds it difficult to take a backseat when it comes to any matters of dispute with Chancellor Angela Merkel,” the cable quoted by Der Spiegel says.

Meanwhile Defence Minister Karl-Theodor zu Guttenberg, Germany’s most popular politician, is quoted as telling the US ambassador to Germany, Philip Murphy, in February 2010 that Westerwelle was the real barrier to a US request for an increase in the number of German troops in Afghanistan.

Guttenberg also disparages his boss, saying that Merkel has trouble implementing her own economic policies.

And Horst Seehofer, the head of the Christian Social Union, the Bavarian sister party to Merkel’s Christian Democrats, is shown as unaware that half of 40,000 US troops in Germany are based in his state, which he also governs.

The State Department documents show Washington was kept abreast of coalition negotiations by an informant while Merkel was forming her current government in October 2009.

A German diplomatic source said that US Secretary of State Hillary Clinton had called Westerwelle on Friday to “express her regret about the impending publication of internal US documents.”

Meanwhile US Ambassador Murphy said Monday that there is no reason to apologise to either Westerwelle or Merkel for the information contained in the leaked documents.

“It’s not about apologies,” he said in an interview with daily Der Tagesspiegel.

“Luckily I am in constant contact with Mrs. Merkel and Mr. Westerwelle, which won’t change, and I am certain that we will get through both this difficult phase on both a governmental and personal level.”

Murphy added that he had the “utmost respect” for both politicians.

“There will be a few difficult days, but I am certain that the German-American relationship won’t be permanently damaged by these tensions,” he said. “We’ll survive.”

But the ambassador also said he was “furious” about the leaks, calling it “irresponsible to publish such documents” which only serve to “cause political and personal damage.”

Former US ambassador to Germany John Kornblum, who served in Berlin from 1997 to 2001, told broadcaster ZDF on Monday that the leaks were a crisis for German-American relations.

“Diplomacy…must function on the basis of trust, and when that trust if broken, as is the case now, then one must begin at almost zero again,” he said.

“The era in which we could speak to each other and say, ‘Don’t worry, that won’t make it into the papers,’ is over,” he said.

Kornblum rejected criticism that the US diplomatic corps functions like an intelligence service, though.

“If one has an informant, that doesn’t mean that it’s about intelligence gathering,” he told ZDF.

On Monday German officials blasted Wikileaks’ choice to release the information as illegal and a potential security threat, but said they would not undermine transatlantic ties.

“We have close and friendly relations with the US government, and they will remain so … These are documents that were acquired illegally and which are being used to make money,” Foreign Minister Westerwelle said.

“A few gossipy comments about European politicians are not exactly welcome but they are not really important. But in other cases, people’s lives could be put at risk,” he told reporters.

And government spokesman Steffen Seibert told a regular press briefing that Berlin’s ties with Washington would weather the diplomatic storm.

“The German-American relationship is mature, it has grown so robust over the decades, it is such a deep friendship based on shared values that it will not be seriously damaged by this publication,” he said.