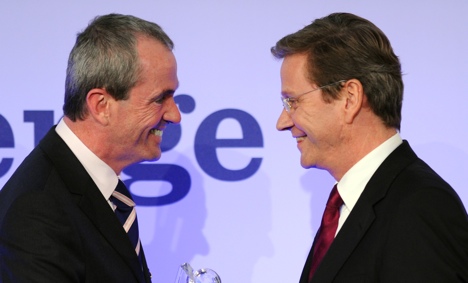 American ambassador to Germany Philip Murphy told Bild am Sonntag newspaper that he regretted the imminent leak of confidential diplomatic dossiers through the internet platform Wikileaks, which he slammed as an irresponsible endangerment of global security.

“It’s difficult to say what effect this will have,” Murphy told the newspaper. “It will uncomfortable at the very least – for my government, for those who are mentioned in the reports, and for me personally as the American ambassador to Germany.”

Westerwelle is considered politically weak, because he has been unable to follow through on the campaign promises he made with his Free Democratic Party (FDP) last year, the paper reported.

Westerwelle’s competence for the foreign ministry has also reportedly been questioned by diplomats. As his tenure began in October last year, US diplomats said the new foreign minister “still had to learn his job.”

US Secretary of State Hillary Clinton called members of the German government in recent days to warn them of the leaks in a bid to minimise the fallout. Wikileaks was due to start releasing the documents late on Sunday, German time.

Chancellor Angela Merkel is also expected to receive a critical, though slightly more positive, appraisal, while Defence Minister Karl-Theodor zu Guttenberg is apparently as popular among international diplomats as he is among the German population.