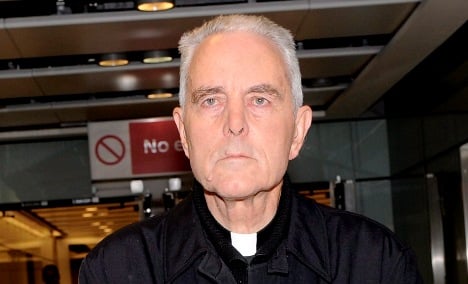 “There was a discussion internally and he said that he would do so (drop the lawyer Wolfram Nahrath),” Saint Pius X Society spokesman Andreas Steiner said. “But as far as I know this has not happened yet.”

The ultra-conservative group had threatened to expel Richard Williamson unless he did so and stopped “letting himself become an instrument of political theories with absolutely nothing to do with his duties as a Catholic bishop.”

Nahrath has defended neo-Nazis charged with violent crimes and has had links with banned Hitler Youth-style groups including Heimattreue Deutsche Jugend, or “German youth true to the homeland,” according to anti-fascist campaigners.

Williamson was found guilty of inciting racial hatred in April and fined €10,000, reduced from an earlier fine of €12,000 he had refused to pay.

The 70-year-old had questioned key historical facts about the Holocaust – a crime in Germany – in an interview with Swedish television recorded in Regensburg and aired in January 2009.

Pope Benedict XVI unleashed a deluge of criticism last year for reversing the excommunication of Williamson and three other Saint Pius X Society bishops in a bid to bridge a rift with the fraternity.

In a series of interviews published in a book this week, Benedict says that he would not have reversed Williamson’s excommunication if he had known about his views on the Holocaust.

According to news magazine Der Spiegel, the society has also asked Williamson to abandon his appeal, which is due to be heard in a court in Regensburg, southern Germany, in February or March, the court said this week.