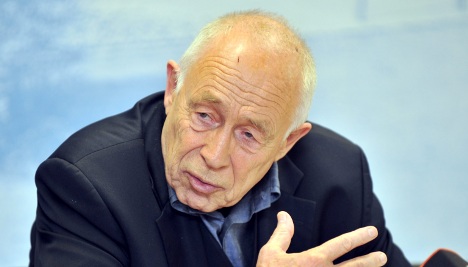 “My vote will depend strongly on whether the land area being built on can be protected against property speculation up to the year 2020,” he told Friday’s edition of the paper.

The plan to radically overhaul the Baden-Württemberg capital Stuttgart’s main train station, turning it into a major European transport hub, has met with strong resistance from locals, leading to violent clashes with police. The project is expected to cost at least €4 billion. Critics say the price tag will rise.

If the project is to go ahead, an ecological zone of 100 hectares should be created where the platforms of the old station now sit, Geißler said. The area could be managed by a foundation – a political solution for which would have to be found quickly.

Geißler also said his recommendations could include changes to the project – for which he could not rule out increased costs.

The environmentalist Greens party, which strongly opposes the project has already said the cost blowout could reach €1 billion.

Baden-Württemberg premier Stefan Mappus announced at the start of this week the state would bear additional costs arising from the mediation recommendations.

The seventh round of talks between opponents and advocates for the project, due to take place today, is expected to focus on costs. Geißler, who has been mediating between the two sides, is due to release his recommendations on Tuesday.

Geißler also told the FAZ that major projects in future should have more participation from citizens right from the start. He also criticised Chancellor Angela Merkel for her remark recently that the Baden-Württemberg state election early next year would be a “referendum” on Stuttgart 21.

The original designer of the ICE route from Wendlingen to Ulm, transport expert Gerhard Heimerl, had recommended at least four points for changes in the form of additional platforms. He believes the new station should have 10 rather than eight platforms because the infrastructure should be built to serve for at least a century.