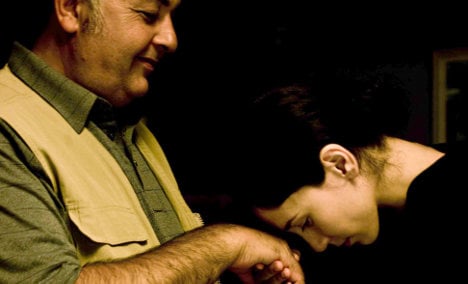 The fourth LUX Cinema Prize was awarded to rapturous applause on Wednesday to German director Feo Aladag for her film Die Fremde, titled “When We Leave” in English.

“I made Die Fremde because I believe we live in a multicultural society which can no longer rest on promoting consensus but must rather find new ways in dealing with arising divergence,” Aladag said.

The winner of the prize receives €90,000 from the parliament to subtitle the film in all official EU languages, adapt it for people with sight and hearing problems, and produce a 35mm print per EU state or for DVD release.

Two other films had been shortlisted for the prize: Greek-German movie “Akadimia Platonos” by Filippos Tsitos and Belgian film “Illegal” by Olivier Masset-Depasse.

The prize is given to films that “illustrate or question the founding values of European identity, explore Europe’s cultural diversity or contribute insights to the EU integration debate,” the parliament says.

The film is also to be Germany’s nomination for the best foreign language film Oscar in the 2011 awards. Starring Sibel Kekilli, the young actor who made her name in the 2004 film “Head-On” (Gegen die Wand), was chosen by a jury at Germany’s film export office.

The jury described it as “an extremely well-written, atmospherically directed and moving film with outstanding acting performances. The film treats the struggle of a young German-Turkish mother for self-determination in two value systems in a highly dramatic and subtle manner.”

“When We Leave” has been hailed with near-universal acclaim at the 35 film festivals where it has been screened world-wide, winning the best film prize at the Tribeca festival in New York. It premiered at the 2010 Berlin film festival in February.

The Academy of Motion Pictures Arts and Sciences will choose five foreign language film nominations for the Oscar on January 25, 2011. Next year’s Oscars ceremony takes place on February 27, 2011.

The film will be released in the US in February 2011.