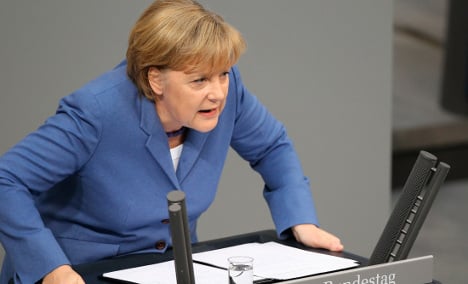 The debate took place in the shadow of the ongoing terrorism alert in Germany, with dozens of elite police officers patrolling barricades around an eerily silent Reichstag after it was closed off to the public earlier this week due to reports of a planned attack.

But the sight of the building’s empty glass dome, a symbol of an open democracy, failed to direct the debate to security issues. Though she called on the nation for continued vigilance in the face of the terror threat, Merkel engaged the opposition in a heated exchange of fire, focussing on the environmentalist Greens, who she repeatedly called an “obstructionist party.”

After lauding her conservative Christian Democrats and their junior coalition partner party, the pro-business Free Democrats, for spearheading Germany’s economic recovery in what she called the “autumn of decisions” one year after elections, Merkel attacked.

“The Greens are closely connected to the word ‘against,’” the Chancellor said.

While they may say they are in favour of rail traffic, they are working tirelessly against the controversial rail project Stuttgart 21, despite the fact that it was decided upon years ago, she said. The party also says it approves of sports, but won’t support attempts to bring the Winter Olympics to Germany, she said.

“If it goes on like this, then the Greens will be for Christmas, but against the run-up time of Advent,” she joked.

“This isn’t how it goes. They won’t make it this way,” she added, saying the party was unrealistic.

Merkel’s words echoed recent criticism from her fellow coalition politicians, who have gone on the offensive as the Green party enjoys record popularity. At well over 20 percent in approval polls, the ecologist party threatens to oust the CDU in Baden-Württemberg during state elections in March. A defeat for the CDU in the southern state after 60 years at the helm would destabilise Merkel’s power on a federal level.

FDP parliamentary group leader Birgit Homburger meanwhile used almost all of her podium time to attack the Greens too, calling their recent participation in anti-nuclear and Stuttgart 21 protests hypocritical.

“We won’t accept that the last resort in this country is a sit-in blockade,” she said furiously.

But Homburger’s Green party counterpart and candidate for Berlin mayor Renate Künast responded to the criticism with ease.

“We’ll gladly take the gloves off when you throw them our way,” she said, adding it was clear the country must choose between Merkel’s conservatives and the Greens.

“The people have an opinion 365 days a year, and not just when there are elections,” she added.

Parliamentary group leader for the party Frank-Walter Steinmeier called her coalition’s first year a “nightmare” that was dividing the nation.

“It is a government that serves its own clientele instead of serving the greater good,” he said, referring to the recent health care reform and the extension of Germany’s nuclear power plant operational schedules.

“Never before has there been so much confusion, so much lack of orientation, so much flippancy,” he said.