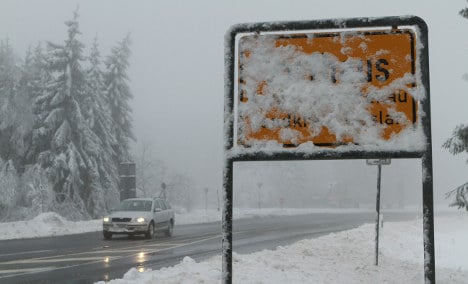 The German Weather Service (DWD) reported on Wednesday that temperatures would hover around freezing in the coming days, with frosty nights and snow and sleet common across the country.

Things could brighten a little around the middle of next week, the DWD added.

After struggling through last winter’s dire shortage of de-icing salt, many cities and municipalities seem to be better prepared, though. Many parts of Germany have stocked up, according to a survey published Wednesday by the ACE automobile club.

Meanwhile, Germany’s upper house of parliament or Bundesrat is set to vote on Friday to pass new regulations cracking down on the failure to use winter tyres, with the new rules to take immediate effect.

Under the country’s current highway code or Straßenverkehrsordnung, only cars fitted with winter, mud-and-snow or all-weather tyres are allowed on the roads when there is “black ice, slush, snow or ice on the roads.”

But the present rules are vague about what defines a tyre as being winter-suitable. A ruling from the Transport Ministry, following EU guidelines on the issue, has specified that a winter tyre has a minimum tread-depth of 1.6 millimetres. Even that won’t quite satisfy the ADAC motor association, which says a tyre requires a tread of at least 4 millimetres to stop effectively on snowy roads.

Under the new rules, drivers caught using their summer tyres in ice, snow or slush will have to pay a €40 fine— up from €20 in previous years. Anyone caught obstructing traffic with inappropriate tyres during the difficult winter season being slapped with an €80 fine.

On the salt issue, the ACE automobile club said most cities were boosting their supplies following a random survey of 27 cities about their stocks and orders.

Last winter, the auto club accused some cities of slashing their salt orders to save money and thereby failing to fulfill their obligations to keep roads safe.

Some municipalities, however, were banking on milder temperatures – in contrast to the latest weather predictions – and had stopped ordering supplies. Others had arranged new, more flexible salt delivery agreements in case the winter turned especially harsh.

The cities of Gera in Thuringia and Kiel in Schleswig-Holstein, for instance, had each doubled their supply compared with last year to 1,200 tones. Koblenz raised their stock from 500 to 900 tonnes and kept an option with their supplier to take another 1,500 tonnes if need be.

Mainz raised its order from 420 tonnes to 720 tonnes. Stuttgart, however reduced its order by 5 percent, ACE reported.