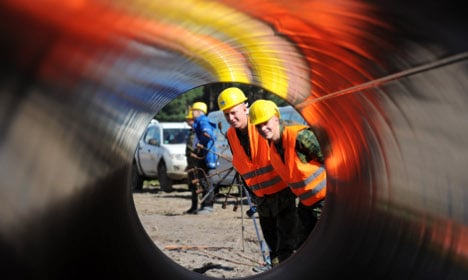 Light at the end of the tunnel? Photo: DPA

“I confirm it’s the highest level since reunification,” an Ifo spokesman told AFP. Analysts were euphoric, with one harking back to the “economic miracle” enjoyed by Germany after World War II.

“Maybe it is a miracle after all,” said Carsten Brzeski from ING bank. “Amidst new financial market turmoil and sovereign debt woes in the eurozone, the German economy seems to be an island of happiness.”

Andreas Rees, from Unicredit, also drew a parallel between the crisis in the eurozone and the seemingly unstoppable rise of its biggest economy. “Ever heard of the European debt crisis?” he asked.

“Looking at the latest Ifo index suggests that German companies are currently shrugging off all these concerns. Instead, they concentrate on the positive aspects of the current upswing, becoming more and more optimistic.

“It is difficult not to become euphoric,” he concluded. A separate index measuring how firms assess their current situation also rose strongly, to 112.3 points from 110.2 in October, its highest level since May 2007.

“The upswing in the German economy is gaining more and more strength,” said Hans-Werner Sinn, the president of the Ifo institute.

Europe’s economic powerhouse suffered more than most during the downturn as its export motor spluttered amid lower global demand for goods “made in Germany.”

In 2009, the economy contracted by a bitter 4.7 percent, the worst recession in more than sixty years.

But Chancellor Angela Merkel pumped tens of billions of euros into the economy, introduced short-term working schemes to keep a lid on unemployment and has overseen an impressive bounce back as exports recovered.

Statistics released on 12 November showed that economic growth in Germany slowed slightly in the third quarter to 0.7 percent but this was still far ahead of fellow eurozone giants France and Italy.

“Unemployment is now under 3 million and will be on average 2.9 million next year,” said a triumphant Merkel in a speech to parliament earlier Wednesday.

However, tempering the euphoria has been some worrying signs from industry, with both production and orders disappointing recently, leading some to believe Germany is heading for a sharper-than-expected slowdown in 2011.

The government itself has forecast growth of 1.8 percent for next year.

Nevertheless, in the words of Jennifer McKeown, senior European economist at Capital Economics, “the survey suggests that the German economy should keep the eurozone recovery going in the very near term at least.”