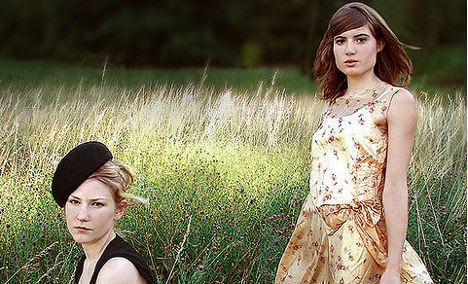 It’s a long way from the genteel avenues of Chichester, southern England to the sultry alleyways of New Orleans. In 2002, two young English girls arrived in the legendary city with a clutch of self-penned folk songs, hungry to absorb the musical atmosphere of the “Big Easy,” where blues, Cajun, creole and jazz bubble nightly in a rich stew. For Katherine Blamire and Jessica Davies, aka The Smoke Fairies, the experience was nothing short of inspirational.

Eight years on the duo are on the cusp of major success. They’ve been feted by Jack White (who produced a couple of early singles), Richard Hawley and Bryan Ferry. And their freshly-released debut album, “Through Low Light And Trees” is garnering praise in the UK and US, their unique blend of gruff blues and dark, angelic folk translating to a hypnotic sound that recalls influences as diverse as PJ Harvey, The Pentangle, Crosby Stills Nash & Young, Nick Drake and Kate Bush.

Is it true The Smoke Fairies once worked in a burger van?

That was a horrible experience. As we grew up we had to support ourselves through different means, and at one point we had jobs in a burger van in Chichester. With a queue stretching out to the horizon we had to serve these burned burgers. I was in charge of cutting the onions and they were all over the floor. It was…character building. Yes, we did write a song about it.

You’ve been playing live for around five years now, but this is the first time you’ve toured since the debut album. How has your live show evolved in the interim?

We’ve developed more confidence. We like to strip it down to the two of us, that’s the core of the sound – the harmonies, the guitars – and we don’t want to lose that, but playing with a band adds a certain dynamic flavour, it helps us progress our sound.

The new album is a confluence of styles and forms, from madrigals, folk, and blues to pop. Is this a fair representation of your musical tastes?

When we first started out, Jessica’s parents had a record collection we’d listen to over and over again. We really loved harmonies, like with Crosby, Stills, Nash and Young, The Grateful Dead, or Led Zeppelin with their insistent riffs, all those classic bands. We had no formal training, other than singing in the school choir, but as we grew up together, we learned how to blend our voices. I don’t know why, but as soon as we got those harmonies, it didn’t sound like anything else we’d ever heard, really. When we realized we could do it, it became almost obsessive, we put harmonies on everything. Now people call our harmonies slightly mediaeval, strange inversions that aren’t normal, but that’s come from the folk element of the influences.

Folk is obviously a huge influence, there are traces of bands like Fairport Convention and Pentangle…

Pentangle! The main reason I started listening to them was that people kept comparing us to them and I was like, who are Pentangle? We don’t really listen to that much of it, but obviously bands like Fairport Convention we really like, but again, it was only when people started comparing us that we started listening. What people don’t understand is that folk is a collective pool everyone is gleaning off. If you listen to folk, there are certain melodies and progressions that come up over and over again and the challenge is how to make that different.

Certain tracks on the album like ‘Summer Fades,’ ‘Dead In My Mind,’ and ‘Erie Lackawanna’ – are steeped in a lovely, melancholy atmosphere that is unsettling, yet beautiful.

A lot of our music has a kind of tension, an unsettling environment. We’ve always liked creating an atmosphere, so when you put the record on you’re transported somewhere different. All the albums we’ve loved have a certain feel running through, a world they conjure up in your mind.

Counter to this though is your love of the blues – so intense you went and hung out in New Orleans a couple of years back to soak up the atmosphere. What was that like?

You hear New Orleans and think of cool music and we wanted to go very badly. What inspired us most about the city was the atmosphere of the place rather than one type of music, something about the whole feel of the place – that swampy heat people talk about – and we played quite a lot when we were there. That was really inspiring.

Now you’re headlining, the album’s been released and you’re touring the world. Life is pretty good?

Yes! We love being out and experiencing new places all the time. It’s inspiring moving around and that transient lifestyle brings a flavour to your music, a lot of musicians will recognize. All these experiences kind of aid what we do, if that makes sense!

I’m looking forward to doing Europe, we’re going to a whole load of places we haven’t been to before. But we have been to Berlin before, and I’m looking forward to seeing what inspires us. It’s just fascinating city, with such an interesting vibe. It’s very unique, and we’ve always wanted to go back. I just hope we get some time to look around!

The Smoke Fairies play the Comet Club in Berlin on Wednesday, November 24.