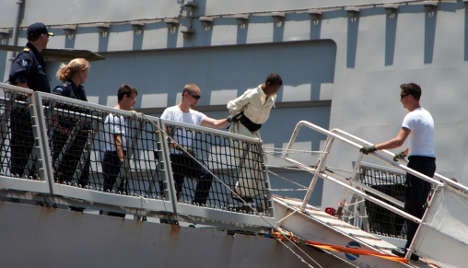 The captured pirates are handed over to the Germans. Photo: DPA

The men are charged with attempting to seize the German container ship MS Taipan in April, some 900 kilometres east of the Somali coast. The trial is expected to last several months.

The pirates were captured by Dutch naval forces who boarded the ship after a brief exchange of gunfire. They were later handed over to the German authorities. The crew evaded capture by hiding in a secure panic room.

Pirates used to have their heads chopped off down by the Hamburg docks, but today’s defendants face a maximum sentence of 15 years in jail.

Experts suggest this will hardly deter others from joining the Horn of Africa’s most lucrative business.

“It’s important pirates should face trial”, but too few countries are prepared to deal with such difficult cases, Berg said.

“There’s little risk involved for would-be pirates” as most of those captured are simply let go, Berg said.

For a Somali pirate to be tried in the West “might be the ultimate prize rather than a deterrent,” suggested Anja Shortland, who studies the issue at the German Institute for Economic Research (DIW)

“Spending three, five, even seven years in a European or American jail followed by political asylum – you can’t do much better as a Somali man,” she said.

“It is rather unlikely that the trial in Hamburg will have any major effect on the general problem,” agrees Niels Stolberg, president of the Beluga Shipping Company, which has seen several of its ships attacked.

Both the number of attacks and the amounts demanded for ransom have spiked over the past two years, despite deployment of naval forces in the region, according to the London-based International Maritime Bureau.

Some 23 vessels and 500 crew are currently held by Somali pirates, according to the Bureau.

The average length of captivity was 45 days in 2008, 90 days in 2009, and 120 days so far this year because “negotiations over ransoms are getting both longer and more complicated,” according to Berg.

Pirates say they received a record $9 million for the release of a South Korean super-tanker in November.

Many shipping companies now take out special “kidnap and ransom” insurance. At least one London company now advertises $5 million coverage for a premium of $15,000 per voyage, according to Berg.

“But it’s not just the payment of ransom that is expensive. You have to add $2 million to $3 million for brokering a deal” with insurance companies employing professional negotiators and helicopters to drop off ransoms to pirates.

According to Berg, pirates manage their money well, investing it abroad and buying better weapons and faster speed boats for their attacks.

Many ships are captured because they gamble with security measures, according to Shortland.

“If you look at the pattern of what is being hijacked, it’s the idle, the unprepared,” she said. “If you make a good show of being prepared then the pirates go elsewhere.”

“A few hundred metres of razor sharp wire are installed along the railing of each Beluga vessel entering risk areas,” he said.

Decks are sprayed with a slippery water-chemical solution to slow down any pirate who makes it onto a ship.