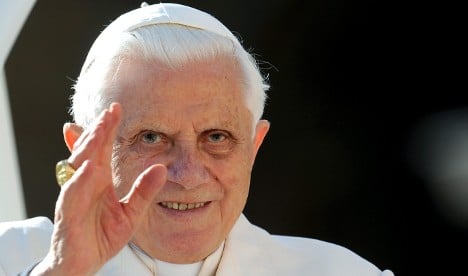 In a series of interviews published in his native German, the 83-year-old Benedict is asked whether “the Catholic Church is not fundamentally against the use of condoms.”

“It of course does not see it as a real and moral solution,” the pope replies.

“In certain cases, where the intention is to reduce the risk of infection, it can nevertheless be a first step on the way to another, more humane sexuality,” said the head of the world’s 1.1 billion Catholics.

The new volume, entitled Light of the World: The Pope, the Church and the Signs of the Times, is based on 20 hours of interviews conducted by German journalist Peter Seewald.

Until now, the Vatican had prohibited the use of any form of contraception – other than abstinence – even as a guard against sexually transmitted disease.

The United Nations Programme on HIV/AIDS, UNAIDS, welcomed Benedict’s remarks as “a significant and positive step forward taken by the Vatican.”

“The move recognises that responsible sexual behaviour and the use of condoms have important roles in HIV prevention,” said UNAIDS Executive Director Michel Sidibe in a statement,

Benedict sparked international outcry in March 2009 on a visit to AIDS-ravaged Africa when he told reporters the disease was a tragedy “that cannot be overcome through the distribution of condoms, which even aggravates the problems.”

To illustrate his apparent shift in position, Benedict offered the example of a male prostitute using a condom.

“There may be justified individual cases, for example when a male prostitute uses a condom, where this can be … a first bit of responsibility, to re-develop the understanding that not everything is permitted and that one may not do everything one wishes,” Benedict was quoted as saying.

“But it is not the proper way to deal with the horror of HIV infection.”

Benedict reiterated that condom use alone would not solve the problem of HIV/AIDS. “More must happen,” he said.

“Becoming simply fixated on the issue of condoms makes sexuality more banal and exactly this is the reason why so many people no longer find sexuality to be an expression of their love, but a type of self-administered drug.”

Other than condoms, the book, set to be translated into 18 languages, addresses many other sensitive issues, including the paedophile priest scandals, celibacy and female ordination.

Concerning the paedophile scandal that has rocked Benedict’s native Germany as well as other countries around the world, the pope said he was “deeply shocked” by it.

Benedict raised the possibility of a “sincere” dialogue with Islam, adding that a controversial speech he gave on the subject was an attempt at an academic discourse rather than a political lecture.

In a September 2006 speech in Regensburg in his native Bavaria, the pope provoked outrage among sections of the Muslim community for appearing to question the rational basis of Islam and associating it with violence.

It was also announced on Friday that Benedict will visit Germany next September and will make stops in Berlin, Erfurt and Freiburg.

Benedict appointed 24 new Cardinals on Saturday, including two Germans, Rheinhard Marx and Walter Brandmüller, at a ceremony in Rome.

In the book Benedict also criticised a French law banning Muslim women from wearing full-face veils such as the burqa and the niqab in public.

“Some women do not wear the burqa entirely voluntarily and it is correct to talk of a violation against that woman. Of course one cannot agree with that,” he said.

“But if they want to wear it voluntarily, I don’t know why one must ban them.”

The new book is the first collection of interviews with the pontiff since the then cardinal Joseph Ratzinger became pope in April 2005.

Seewald asked more than 90 questions on three major themes during conversations conducted July 26-31 at the pope’s summer residence in the Italian town of Castel Gandolfo.

The pontiff also discusses the case of the Holocaust-denying bishop Roger Williamson, the danger of a schism in the Church and the possibility of a Vatican III Council on Church reforms, which has for now, been put off.

A former communist, Seewald became Catholic after meeting Cardinal Ratzinger, with whom he produced two earlier volumes of interviews.