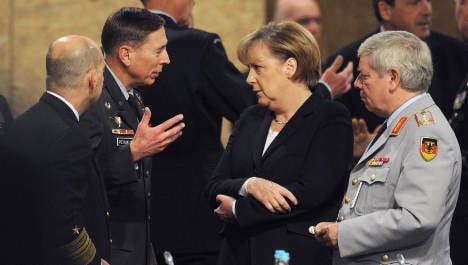 Merkel talks with US General David Petraeus at the NATO meeting. Photo: DPA

The process of withdrawal should start at the beginning of next year, according to a summit document leaked on Saturday.

The meeting also focussed on more traditional NATO topics – largely the relationship with Russia, with Chancellor Angela Merkel hailing the summit as historic in this regard.

Speaking shortly before Russia’s President Dmitry Medvedev was due to arrive in Lisbon to meet leaders of the NATO powers, Merkel welcomed what she said was an opportunity to build new ties with a former foe.

“A former military adversary is now clearly a partner,” she told reporters.

“It’s a turning point in working together that we can clearly call historic. Of course there’s still a long road ahead of us, to build security with Russia, but to start on this road has extraordinary importance.”

Saturday’s meeting is the first of Russian and NATO leaders in the alliance’s NATO-Russia Council since April 2008, before Moscow’s brief war with Western ally Georgia, and is widely seen as a breakthrough.

US President Barack Obama, who is promoting what he has dubbed a “reset” of Washington’s strained ties to its former Cold War foe, has said Moscow will be invited to take part in NATO’s planned anti-missile shield.

The allies will also talk to Medvedev about their war in Afghanistan, hoping to convince him to expand the list of goods allowed to transit through Russia on their way to the front and to supply Kabul with transport helicopters.

France and Germany agreed a compromise on NATO’s future as a nuclear-armed alliance ahead of the Lisbon meeting.

Germany had wanted NATO’s new “strategic concept” to commit the allies to a Europe free of nuclear weapons, while its neighbour France remains wedded to its independent deterrent as the bedrock of its security.

But diplomatic sources at the summit said they had agreed a “neutral” form of words that satisfies both, by expressing hope for future disarmament while insisting that NATO would keep nuclear weapons as long as others do.

“An accord has been reached between France and Germany on the points under discussion,” a French official said, speaking on condition of anonymity while the 28 NATO leaders met in closed-door session.

The summit will see the allies agree to set up a continent-wide missile defence shield but, while some in Germany would like to see this replace deterrence, France believes nuclear weapons must remain as a last resort.