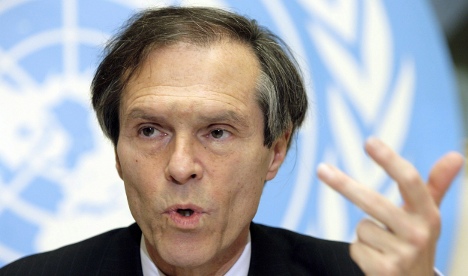 Speaking ahead of a major NATO summit to discuss the long-running conflict, Ambassador Michael Steiner told daily Der Tagesspiegel that the west had in the past deluded itself about the goal of a democratic Afghanistan. A war for such a goal could not actually be won, he said shortly before the Friday summit in Lisbon.

“Everyone knows that there can be no military solution in Afghanistan,” Steiner said. “The west has in the past indulged in illusions. But now a realistic goal is being pursued: effective stability in Afghanistan and a guarantee of essential human rights. There is not going to be a Switzerland in the Hindu Kush.”

While there had been military achievements against the Taliban insurgency, the essence of the problem in Afghanistan had to be solved politically, through a reconciliation of political opponents in the country, he added.

Leaders from NATO’s 28 member nations are meeting in the Portuguese capital of Lisbon to discuss, among other things, the future strategy of the US-led International Security Assistance Force. The war has been running for more than nine years, during which ambitions for the future of the country as democracy have been scaled back and questions have arisen about the western-backed President Hamid Karzai.

Germany has just under 5,000 troops currently stationed in Afghanistan. Earlier this week, Foreign Minister Guido Westerwelle said the government aimed to start withdrawing them in 2012. NATO members will discuss in Lisbon a plan to hand over full responsibility for security to the Afghan government by 2014.