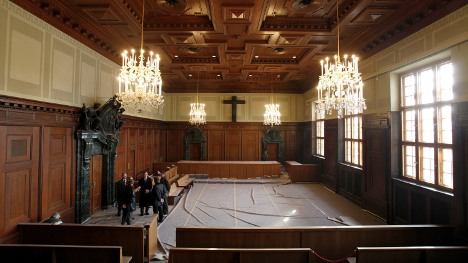 The exhibit in the southern German city, due to be inaugurated on Sunday by Russia’s foreign minister and senior US, British, French and German officials, is aimed at meeting growing interest in the ground-breaking trials in Germany and around the world.

The dock is located in an attic, one storey above the wood-panelled courtroom 600, which is actually still in use 65 years after Göring and 20 others went on trial on November 20, 1945.

Göring was sentenced to death after 218 trial days, together with 11 others including Joachim von Ribbentrop, foreign minister. Martin Bormann, Hitler’s secretary, was sentenced in absentia.

Göring cheated the gallows by swallowing cyanide in his cell hours before his scheduled hanging but the others were all executed in a gymnasium adjacent to the courthouse which was later knocked down.

Three defendants were acquitted and four given jail sentences, including Albert Speer, Hitler’s architect, and the Führer’s deputy Rudolf Hess, who died in Spandau prison in Berlin in 1987.

The Bavarian city of Nuremberg was strongly associated with the Nazis. It was here that the Nuremberg race laws against Jews were drawn up and where Hitler held enormous party rallies.

It was the success of a documentation centre opened in 2001 on the grounds of these rallies that prompted authorities to create the new exhibit. There has also been an increasing number of people interested in seeing courtroom 600.

The new exhibit covers the legacy of the Nuremberg trials, which continue to inspire other countries recovering from conflicts, such as the former Yugoslavia, as well as the UN’s International Criminal Court (ICC).

“It was so clear that they were guilty but still they had a trial,” Juliana Rangel, head of the library and documentation division at the ICC in The Hague told AFP, calling the importance of the trials “enormous.”

“It was so well done, with the respect of the defendants’ rights. It was very important, it was a landmark. It was the beginning of the end for impunity,” she said.

The exhibit opens to the public on Monday.