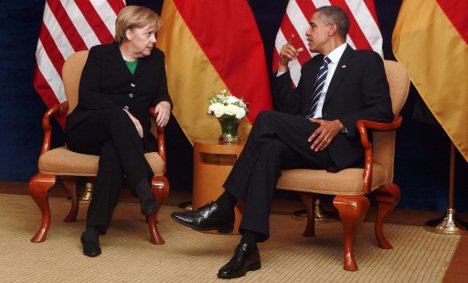 American track athletes dominate the 400 metre race. They’ve won Olympic gold in that discipline 19 times, and have stood atop the winner’s podium since 1984. That sticks in the craw of the global competition, which is why a new proposal has been submitted to the International Olympic Committee. In the future, all US 400-metre runners must carry a five-kilo backpack. This would level the playing field for the competition.

As silly as that sounds, the US government is making a similar argument about the German economy these days. Well-crafted German products are in demand all over the world, and this is driving growth. At the same time, unemployment is sinking to ever-lower levels, the national debt is relatively low by OECD and EU standards, and the country’s DAX stock index is on the rise.

But rather than welcome the success of his European partner, US Treasury Secretary Timothy Geithner has suggested that Germany’s trade surplus be capped: in other words, that exports be banned if they go above a certain level. He is supported by voices from EU headquarters in Brussels and Germany’s socialist Left party. This is an odd coalition of free trade opponents, but they are united by one thing: envy.

US President Barack Obama adopted his finance minister’s proposal ahead of the G20 in Seoul, South Korea last week, but fortunately Chancellor Angela Merkel resisted his pressuring. After all, she is in a strong position: the Americans are criticizing Germany for what it is apparently doing right.

While the economies of countries like the US, Britain, France, Spain or Greece are still struggling or facing drastic austerity measures and angry street protests, Germany has weathered the global financial and economic crises well. There is no sense of a divided society here.

It’s all due to a convergence of contributing factors: the delayed effect of former Chancellor Gerhard Schröder’s labour market and welfare reforms known as the Agenda 2010, wage restraint by trade unions, the ‘cash-for-clunkers’ car purchase scheme, a relatively moderate stimulus plan, and propping up the eurozone by involving the International Monetary Fund. More than once, Merkel was criticized for any and all of these measures. But at the end of the day, she was always proved right.

Success breeds resentment, and it’s no surprise that German opposition parties and certain nations are grinding their teeth, because the German example puts pressure on their leaders to explain themselves. But why are Germans themselves not more proud of the achievements they have helped produce?

Even as their country has escaped the maelstrom of the crisis – and with an even healthier job market than before – Germans are lost in raging debates about disillusionment with politics and democracy, deep social insecurity and other supposed anxieties of the zeitgeist.

The country’s mood is fundamentally anti-cyclical. But we already know that from other concerns. While life expectancy rises every year, so does anxiety about chemicals in food, healthy diets and fitness. Will Germans ever be relaxed and satisfied? Apparently that’s the last thing we’d want.