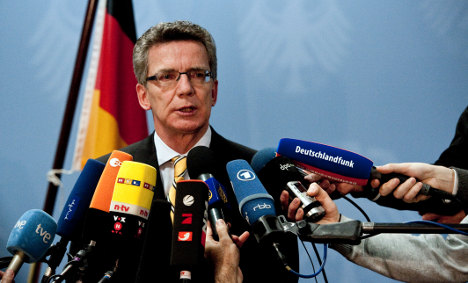 On Wednesday, the Interior Minister solemnly cited information from “foreign partners,” stating that terrorist attacks had been planned for late November, and described a “new situation” regarding the Islamist threat towards the nation.

The minister also encouraged Germans to go about their lives without worrying, explaining that federal police had been put on alert and heightened security was in place at transportation hubs.

Conservative daily Die Welt complimented de Maizière’s reassuring conduct, which it said balanced the seriousness of the threat with the need to avoid panic. It was the very refusal to resort to hysteria that was the great strength of a democracy, the paper wrote.

“The west (to Islamists) is molly-coddled, cowardly and unwilling to fight. Better red – or whatever else – than dead. It is among the strongest features of our civilisation that this is not true,” the paper wrote.

On the contrary, the west had come through crisis after crisis with its values and its constitutions intact, the paper argued – whether it was the blitz in London or September 11 in the United States.

“There are situations in which calm is actually a civic duty and has nothing to do with apathy. It is not a sign of carelessness but of strength if life goes on as normal in dangerous situations. In a democracy, heroism and the most normal daily routine go hand in hand.”

Centre-left daily Süddeutsche Zeitung wrote that unlike his predecessors, de Maizière has been no “Federal Fearmongering Minister.”

“For this reason his warning of an impending attack is so effective,” the paper said.

The threat of terrorism presents a Catch-22 for government leaders, who face criticism if they have failed to warn citizens in the event of an attack, or accusations of fearmongering when they do issue a warning. Given the situation, de Maizière’s approach was correct, “and there is no better answer,” the paper said.

It was appropriate for the minister to advise against hysteria and worry, because the danger of actually being the victim of a terrorist attack is smaller than any other security risk in Germany, the paper explained.

But the state must show strength as well as restraint, it said.

“Interior security requires internal strength and unbreakable trust in the basic rights of the constitution – even in times of terrorism. As long as an interior minister can rely on this, then interior security in Germany isn’t in a bad position,” the paper wrote.

Centrist daily Der Tagesspiegel also referred to the challenge that confronts politicians in times of terror, but said citizens are responsible for ensuring their rights are not infringed.

“There is no escape from this dilemma,” the paper wrote. “In the area of security (de Maizière) can’t win despite clever measures, because there is no thanks for the unhindered continuation of normality.”

Meanwhile the average citizen’s abstract understanding of the danger posed by terroristm rarely correlates with everyday experience, it said.

“Here a few more police officers, there more fundamental security checks at the airport. And the only, often unsatisfying measure, of whether this is necessary is the word of a minister. We must trust him because we can’t know any better.”

Citizens must allow the government to take a “leap of faith” in such situations, the paper said.

“But they still maintain the right to punish misuse,” it concluded.

The centre-right Frankfurter Allgemeine Zeitung wrote that every citizen needed to make a level-headed assessment of the threat. That meant being watchful but also getting on with life.

“The Interior Minister cannot please everyone. If he issues warnings too loudly and too often, people accuse him of being alarmist. If he is too cool and guarded, it is said, he is lulling people with the illusory comfort of safety,” it wrote.

“There are by nature ‘great security gaps’ of the kind the police union is talking about. But that doesn’t mean we are defenceless. Any individual, however much he may rely on the law of the state, can meet terrorism head on. Not only by being watchful, but also by continuing to live the way he wants. No reason for hysteria, says the minister. There shouldn’t be, even in an emergency.”

Daily Saarbrücker Zeitung referred to security experts who say a terror attack in Germany is just a matter of time.

“That isn’t very encouraging, but unfortunately realistic,” it said. “With this in mind Interior Minister Thomas de Maizière displayed the right solution: We will allow terrorism to alter neither our habits nor our culture.”