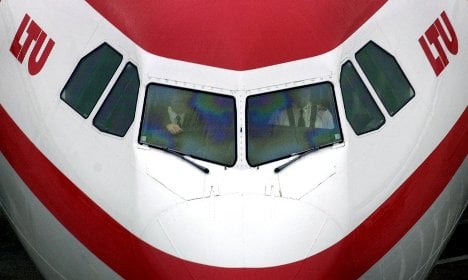 X-rays of the suitcase showed batteries connected to a detonator and a ticking timer. Authorities are examining whether the device could have exploded.

The BKA sent officers based in neighbouring South Africa to the Namibian capital to aid local authorities in the investigation, and plans on sending more help from Germany soon.

Every passenger and piece of luggage on the flight by the charter airline underwent an additional security check before the plane was allowed to take off. It arrived safely in Munich early on Thursday morning with 296 passengers on board.

“Only after the conclusion of an investigation and visual inspection by the BKA will there be information as to whether these were explosives,” the police statement said.

Namibian police later on Thursday only confirmed the luggage contained wires and a timer.

“It was a laptop bag wrapped in plastic, which was then opened,” police inspector general Sebastian Ndeitunga told national radio, the Namibian Broadcasting Corporation (NBC).

“Our officers found the parcel suspicious as it did not have a travel tag and it was thus removed from the luggage,” said Ndeitunga. “We found in the bag some devices, wires and a running clock.”

A spokeswoman for Air Berlin, Germany’s second largest airline, said the baggage had not been checked in.

“It is an unlabelled piece of luggage, which means that its destination was not indicated nor was the airline with which it was to fly. In other words it was an unattended piece of luggage in the hall at Windhoek airport where luggage is processed,” she said.

“It is possible that it only happened to be there at the time the Air Berlin plane was to be loaded.”

“The checks worked in every way,” he said in Hamburg, adding early indications showed the luggage was intended to be put on the flight to Munich. “I cannot confirm whether there was detonation mechanism or if it was functioning.”

The incident comes just one day after de Maizière revealed that authorities had “concrete” information of plans by Islamists to attack Germany later this month.

“There is information from our foreign partners that planned attacks are allegedly to be carried out at the end of November,” he said Wednesday, adding that there was a “new situation” regarding the Islamist threat.

Germany has never experienced an attack by Muslim extremists on its own soil. But authorities say the country, which once was home to the terrorists behind the 9/11 attacks in the United States, has a large and dangerous Islamist scene.

The closest it has come to suffering an attack was in July 2006, when Islamic militants placed suitcases containing homemade bombs on two regional trains at Cologne’s main station. But they failed to detonate, averting an almost certain bloodbath.