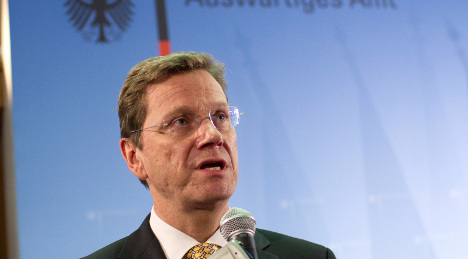 “Subject to progress in the security situation, it is our goal to commence reducing our own contingent in 2012,” he wrote in an opinion article in daily Die Welt.

He was speaking ahead of the NATO summit in Lisbon, where the 28 members of the alliance will discuss their Afghanistan strategy starting on Friday.

His remarks also came as Germany heightened security at its train stations, airports and other busy public areas after the government received “concrete” information that Islamic extremists were planning at attack around the end of this month.

Germany has nearly 5,000 troops stationed in Afghanistan, where a US-led NATO force has been fighting Taliban insurgents since 2001. Earlier this week, it was reported that Chancellor Angela Merkel wanted to renew the parliamentary mandate for the Afghan mission for a further year, meaning withdrawal could begin in 2012 at the earliest.

Westerwelle’s remarks now confirm 2012 as the target for the beginning of a withdrawal.

The transfer of responsibility for security to the Afghan government led by President Hamid Karzai is scheduled to begin next year, with the Afghans supposed to assume full responsibility by 2014.

Westerwelle also called on the alliance to take a fresh look at nuclear disarmament – an issue his Free Democratic Party has consistently championed.

It was in everyone’s security interest that NATO, as the world’s most important strategic alliance, made its contribution to disarmament, arms control and the non-proliferation of nuclear weapons. The alliance should commit itself to the goal of a world without nuclear weapons, he said.

Russia’s involvement in the Lisbon summit offered “the historic chance to finally put Cold War mentalities behind us,” he said.