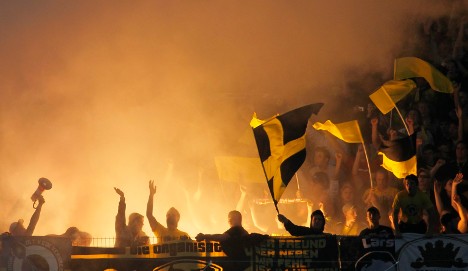 The programme, aimed at soccer rowdies under 25, allows participants to shorten the period of their ban.

Fighting and setting off fireworks are among the offences that get German fans banned from stadiums for up to three years. Some 3,000 hooligans are currently on the black list for the country’s 18 Bundesliga teams – among them are 200 Dortmund fans.

But the organisation and police noticed that the tactic meant to keep spectators on their best behaviour was actually serving to further alienate hard-core fans known as ultras.

A few months ago, all sides met up for a discussion about the issue.

“We are proud that we brought the ultras and the police to one table,” Watzke said.

Participants came up with the pilot project idea, which is similar to stints in “re-socialisation” programmes doled out to youth offenders by German courts.

“For every month of their stadium ban they work three hours,” said Christian Hockenjos, leader of the BVB commission which handles each case individually.

Particularly severe violations still require offenders to serve out half of their ban before they’re allowed to work off the rest, though.

Both a Dortmund retirement home and a clinic for youth psychiatry have expressed a willingness to take on young fans willing to work.

Project leader Watzke said participants won’t have it easy in the programme, though.

“It’s not enough to just play a few hours of table tennis,” he said.