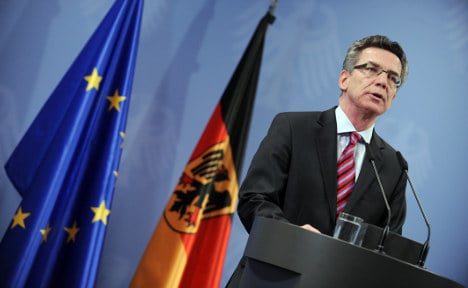 “There is information from our foreign partners that planned attacks are allegedly to be carried out at the end of November,” he said in Berlin, describing a “new situation” regarding the Islamist threat towards the nation.

“There’s reason to be worried, but no reason for hysteria,” he said, mentioning “concrete leads” being followed by the authorities.

De Maizière said he had put federal police on alert and ordered heightened security at German airports and train stations.

“From today, there will be a more visible police presence. I thought it should be explained to citizens,” he said.

The announcement is a marked departure from the German government’s warnings in recent weeks of an abstract terrorist threat.

Only last month, de Maizière criticized reports Islamists were planning imminent attacks in Germany as “alarmist” and said there was no reason to change the country’s security threat level.

But the minister said on Wednesday security services had noticed growing signs that the terrorist network al-Qaida was planning attacks in the United States, Europe and Germany since mid-2010.

“We now have more details and indications of danger,” he said. “It is the unanimous assessment of the security services that we are currently dealing with a new situation.”

He said Berlin had been tipped off by overseas authorities following the discovery of two US-bound parcel bombs originating from Yemen last month. One of the packages travelled undetected through Cologne-Bonn Airport before being stopped in Britain.

Daily newspaper Der Tagesspiegel reported the United States had warned German officials that between two and four al-Qaida operatives were on their way to Germany and Britain to attempt attacks.

Security sources cited by the paper named Germany’s popular Christmas markets among potential targets and said the terrorists were expected to arrive in the country on November 22 via India or the United Arab Emirates.

But de Maizière said Germans should not be cowed by the threat of possible attacks.

“We will not allow international terrorism to limit our way of life or our liberty,” he said.

Although Germany has nearly 5,000 troops in Afghanistan under NATO command, it has never experienced an attack by Muslim extremists on its own soil. But authorities say the country, which once was home to the terrorists behind the 9/11 attacks in the United States, has a large and dangerous Islamist scene.

The closest it has come to being attacked was in July 2006 when Islamic militants placed suitcases containing homemade bombs on two regional trains at Cologne’s main station. But they failed to detonate, averting an almost certain bloodbath.