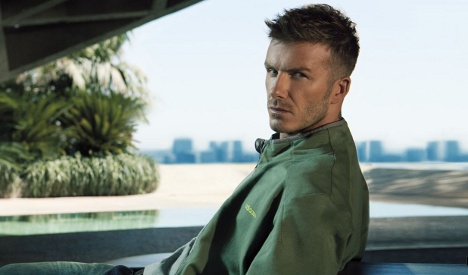 Photo: A screenshot of David Beckham for Adidas Neo.

With Adidas Neo, the firm hopes to “slice off a nice piece of the cake” of the worldwide fashion market, expected to be around €125 billion ($170 billion) by 2015, said Erich Stamminger, an Adidas board member.

Hoping to appeal to fashion-conscious teens, the brand’s collection will include items inspired by English football star and notorious clothes horse David Beckham.

“We are unlocking a new segment: children and young people between 12 and 19,” said Stamminger in an interview with German weekly Wirtschaftswoche.

“A lot of them already wear Adidas for sport, but they are looking for fashionable stuff for school and free time,” said Stamminger.

He added the new products would be priced roughly 10 percent above those offered by Hennes&Mauritz, around the same price as Zara.

“We are already opening Neo stores in markets like China, Russia, India and the Philippines…we are already banking on sales of up to 400 million in 2010. By 2015, we assume we will have more than €1billion.”

Last week, Adidas laid down an ambitious gauntlet to arch US rival Nike, saying it aimed to outgrow the world number one over the next five years.

Adidas said that by 2015 annual sales would reach €17 billion, representing growth of 45-50 percent from 2009. Profits, meanwhile, would grow at an annual pace of 15 percent.