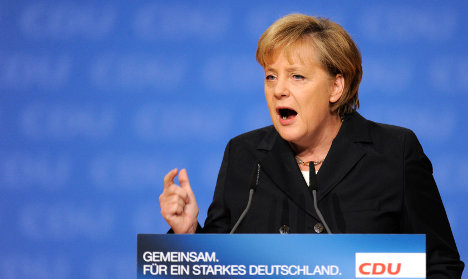 Merkel comfortably won 90.4 percent of the vote at a CDU party conference in Karlsruhe, down slightly from 94.8 percent she scored last time.

“I will continue with joy as head of this great party,” Merkel said.

The country’s first female and eastern German leader, Merkel remains the unchallenged head of the CDU after five years as chancellor and ten as party head.

But after one-year into a second term that has so far proved rocky, whether Merkel can stay in power depends on how the CDU fares in 2011’s “super election year” when six of Germany’s sixteen states go to the polls.

Since forming a coalition with the pro-business Free Democrats (FDP) after elections in September 2009, the CDU’s poll ratings have remained stubbornly weak, while those of the FDP have plummeted.

“It is absolutely fine for decisions that we have taken this autumn to be contentious,” Merkel, chancellor since 2005, told the party conference. “They will prove to have been necessary and at the end of the day they will convince people.”

In May, the CDU got a taste of voter unhappiness when it lost power in the most populous state, North Rhine-Westphalia, costing the coalition its majority in the federal upper house. In the wealthy southwestern state where the party is holding its congress, Baden-Württemberg, the most important of the 2011 elections, the CDU could find itself turfed out of power for the first time since 1952.

“The achievements of the … government could be seen in its deeds, but not always in its style. Our friends in North Rhine-Westphalia suffered because of this,” Merkel said on Monday.

Merkel and Finance Minister Wolfgang Schäuble have fought hard to resist calls from the FDP for tax cuts to boost the economy, preferring instead to reduce Germany’s budget deficit by cutting spending.

“We have to do things in the proper order: first budgetary consolidation, simplify taxes, then cut taxes,” Merkel said.

The coalition partners have also fallen out over a range of issues like healthcare reform, social security and military service, allowing the opposition – particularly the ecologist Greens – to gather support.

The eurozone debt crisis earlier this year also dented Merkel’s popularity, leaving her accused of sending German taxpayers’ money to bail out, according to daily Bild , so-called “lazy” Greeks with “the fattest cheque in history.”

Meanwhile there has been an exodus of top conservatives, including the recent departure of president Horst Köhler following an interview gaffe. There is also speculation that Schäuble, Merkel’s right hand man, might soon resign for health reasons.

The government’s decision to postpone the date for Germany to abandon nuclear power has sparked mass protests, most recently over a radioactive waste shipment that needed a 20,000-strong police escort to reach its destination.

“In the 11th year as head of the CDU, Angela Merkel will have to reinvent herself for a third time,” the Süddeutsche Zeitung daily said. “The chancellor won’t get a fourth chance.”