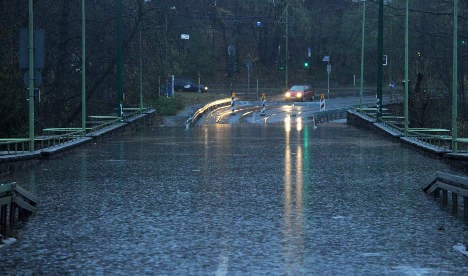 A flooded road in Essen on Saturday. Photo: DPA

The emergency authorities were kept busy the whole day and night, pumping out flooded cellars, trying to prevent new influxes with sand bags, and organising traffic away from flooded roads.

Several sections of motorway had to be closed off, including the A40 between Dortmund and Duisburg as well as the A33 near Paderborn and the A61 near Mönchengladbach.

The main problem was the combination of heavy rain with autumn leaf-fall, which blocked drainage systems.

“The rain on its own would not have been so bad. The problem is much more the autumn leaves which block up the gullies so that the water cannot drain away,” said a police spokesman in Düsseldorf.

Much of North Rhine-Westphalia remained rainy during Saturday night, with the German Weather Service (DWD) extending its storm warning until Sunday afternoon.

A spokesman said that some areas had already received 70 litres of water per square metre of ground, and that a further 20 to 30 litres should be expected during Sunday, particularly in the northwest of the state.

The next few days will remain changeable, but are not expected to be quite as stormy, while the end of Carmen should result in mild temperatures across the country, rising to as much as 18 or 20 degrees.

After this the chill of autumn will return with mid-week temperatures dropping to between four and eight degrees.