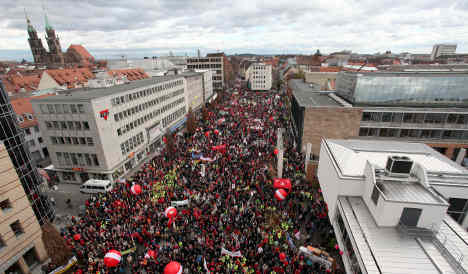 The demonstration in Nuremberg. Photo: DPA

Police counted around 30,000 demonstrators in Nuremberg, at least as many in Stuttgart and more thousands in Erfurt and Dortmund.

They were calling for the provision or maintenance of a raft of social provisions including fair wages, a solidarity-based healthcare system, strong public services, abandonment of the increase in retirement age to 67 and better education.

“People are currently having to bear the consequences of the crisis in the financial markets, with tax increases, job losses and cuts in social services. That has nothing to do with fairness,” said Berthold Huber, national chairman of the IG Metall trade union speaking in Stuttgart.

“We do not want a republic in which the interest groups define policy with their money, their power and their influence.”

Frank Bsirske, head of service trade union Verdi told a rally in Dortmund that Germany had become a tax haven for the wealthy because top-earners, business profits, shares and large inheritances were not taxed enough.

“Burden those below and relieve those on top, that is the wrong way,” he said.

He also tackled the soon-to-be enacted increase in official retirement age from 65 to 67, saying it was a social time-bomb. The high retirement age and low wages would put poverty in old-age onto the daily agenda of the country, he said.

France was recently thrown into chaos by strikes and demonstrations against plans to raise the retirement age there from 60 to 62.