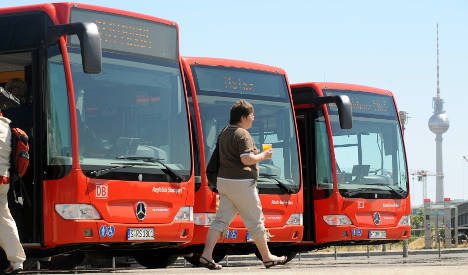 The increased bus services are planned for January, the magazine said, and will offer competition for the Bahn’s own rail network. The trip between Cologne and Hamburg will cost €35 on a Bahn bus – 20 percent cheaper than a ticket on the ICE train with a BahnCard 50 discount card.

This represents an early-than-expected extension of the Bahn’s bus network, as until now managers had been expected to wait until a change in the law due in mid-2011.

The law change agreed by the government will open the German market for long-distance bus services as it will get rid of a 1934 law which meant a new bus route could only be approved if it significantly improved the transport options already on offer. This will be changed so that a new route is possible if the new option is cheaper than that already available.

The Bahn recently attracted critical press after trying to push a student bus company start-up out of business. Der Spiegel reported that three students who had founded a web-based firm Yourbus which arranges bus trips once at least ten people have registered for a particular route on a particular day, were being targeted by Deutsche Bahn.

Bahn lawyers served the Friedrichshafen-based trio Christian Janisch, Ingo-MayerKnoch and Alexander Kuhr with a writ insisting that they stop operations as they were breaking that 1934 law. This was rejected in 2008 by a local authority in Bodensee when the trio applied for permission to start their company, but Deutsche Bahn has since taken the case to court.

Yourbus has been running trips since more than half a year, with low prices attracting younger users – a trip from Frankfurt to Cologne costs between €12.50 and €15 each way – compared with €64 for a train ticket without a BahnCard.

The Frankfurt district court is due to deal with the case on November 19, according to a statement on the Yourbus website.