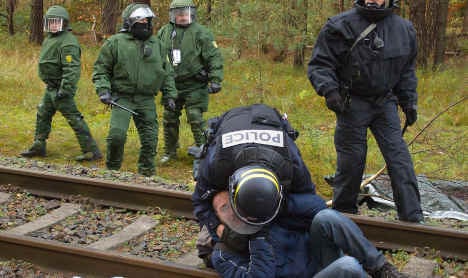 Opposition politicians have criticised the French policing operation as illegal, while Lower Saxony police and politicians were not informed by their federal colleagues, according to Saturday’s Berliner Zeitung.

A note from the Lower Saxony state Interior Ministry seen by the paper says the police force in the state, “was also not aware during the operation that French officers conducted operational duties in uniform and with equipment.”

The activities of the French officers only became apparent after photos merged of the elite unit CRS officers ‘taking action’ against protestors in Wendland, the paper said.

Lower Saxony police managers had no idea of the French officers’ presence, nor of how many there were operating in the area. The paper said that 17 photos show people wearing the French unit’s uniform, “obviously taking steps against demonstrators.”

The operation was being led by the federal police, the paper said, while the French police attaché, who was supposed to be overseeing his countrymen’s actions, lost contact with at least one officer during the operation.

The federal Interior Ministry has admitted the deployment of the CRS officers, with a spokesman saying they were only on site as observers. He said the photos showed the French officers helping the German federal police in an emergency situation. Opposition politicians in Berlin said this was not a credible explanation.

Meanwhile the greens in Hamburg’s state government coalition have said they would refuse permission for a nuclear waste transport heading for Russia to go through the port there.

“We are determined to use all possibilities to prevent the transport and transfer of nuclear waste en route to Russia via Hamburg harbour,” said Jens Kerstan, parliamentary party chairman of the Hamburg greens, GAL, which rules Hamburg in coalition with the conservative Christian Democratic Union.

Kerstan said he would be checking whether the contract with Russia was legally valid and whether a final decision had been made on the route the transport would take from the Westphalia temporary storage facility in Ahaus.

The 18 containers of radioactive waste originated at the East German nuclear research facility in Rossendorf near Dresden, and is planned to end up at the Russian nuclear centre in Majak, in the southern Urals. This has not yet been approved by the German authorities, which are planning to make a safety inspection there.

Environmentalists say a route is being planned from Ahaus to Hamburg via the Autobahn 1, through Lower Saxony and past towns such as Osnabrück, Wildeshausen and Buchholz.

The Bremen state government decided on Thursday to not allow any further nuclear transports to pass its port, while the city of Lübeck decided to ban such transports back in 1990.