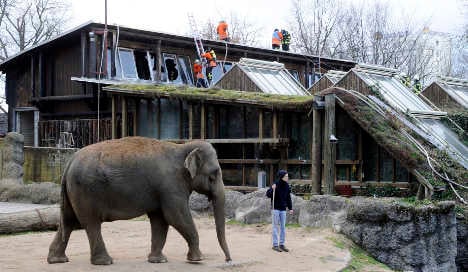 One of the zoo's elephants this morning. Photo: DPA

Fire broke out in the petting area of the zoo, killing all 26 animals kept there, including sheep, African dwarf goats, alpacas, Shetland ponies and Sardinian dwarf donkeys. It would seem only the doves which were housed there could escape.

By the time the alarm was raised, at around 4 am on Saturday, the petting animals had already perished, and strong winds were pushing the fire towards the neighbouring elephant enclosure, according to local news portal ka-news.de.

The zoo director and other keepers rushed to the scene and brought the elephants and hippos away from danger, into open enclosures. Apparently the animals were uninjured, but distressed by the night’s events.

Around a hundred fire fighters were at the zoo and managed to prevent the blaze from spreading but were still working on extinguishing it on Saturday morning.

An investigation into the cause of the fire is expected to be launched by the criminal police as soon as they can enter the area. The zoo will initially remain closed, with a decision on when to re-open set to be made later this weekend.