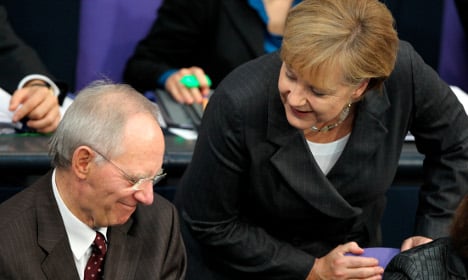 Financial daily Handelsblatt had cited sources saying that Interior Minister Thomas de Maizière would take over Schäuble’s position, while Environment Minister for the southern state of Baden-Württemberg, Tanja Gönner, was being considered as a new federal minister.

The report followed repeated speculation about a possible resignation by Schäuble, who has suffered a series of health issues in the last year. The talk intensified this week after his press spokesman Michael Offer resigned following a public reprimand by Schäuble at a press conference last Thursday.

But at a joint press conference with her finance minister at the G20 summit in Seoul, South Korea, Merkel said that Handelsblatt’s report was wrong.

She and Schäuble have a “true understanding,” she said.

Before Merkel’s statements her government spokesperson Steffen Seibert had also weighed in on the matter.

“Chancellor Merkel has no reason to change the cabinet,” he said.