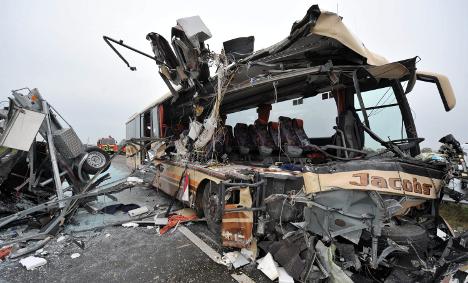 The accident took place on the A28 motorway near Apen not far from Oldenburg.

The bus, carrying 23 secondary school pupils and a few teachers and parents, was sliced all along one side, seriously injuring one of the adults accompanying the children. All nine were rushed to the hospital. Five other passengers suffered minor injuries.

The dramatic crash caused scenes of chaos and horror.

“This was no ordinary operation – especially because of all the hurt kids,” said police spokesman Dirk Fey.

He said most of the children belonged to a 7th grade class at a school in the East Frisian town of Hage.

The authorities had originally believed one person had died in the accident, but later corrected this information.

Four helicopters and 50 emergency vehicles were at the scene. The motorway took four hours to clear.