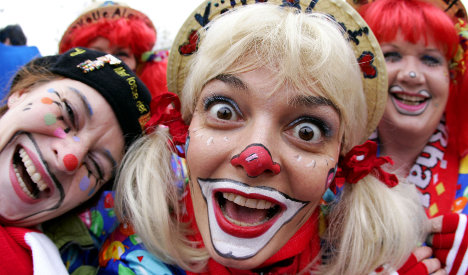 This year, some 80,000 Jecken, or jesters, were expected to come to Cologne’s centre to open Karneval, when Rhinelanders drop their inhibitions and abandon any sense of decorum until Ash Wednesday, when things get serious again.

Other Karneval cities, such as Düsseldorf, Bonn and Mainz also had celebrations to kick off the silly season.

Cologne’s motto this year is “Köln hat was zu beaten,” a play on words that means both “Cologne’s got something to offer” and “to beat,” referring to the drums that are an inescapable – and often headache-inducing – part of the Karneval experience.

The festivities, which are based on Catholic traditions, won’t really get going early next year, when the large Sitzungen take place. They are gatherings where costumed participants watch entertainers, sing songs and generally get drunk on the local beer.

The climax is the Rose Monday parade before Ash Wednesday. The Karneval season is longer than usual this year, as Ash Wednesday doesn’t roll around until March 9.