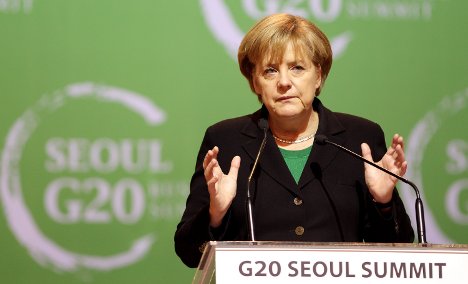 “To set political limits on trade surpluses and deficits is neither economically justified nor politically appropriate,” she said in a speech to a G20 business summit, hours before leaders of the grouping were to begin meeting.

The United States had earlier proposed limiting current account surpluses or shortfalls to four percent of a nation’s output.

It shelved the idea of numerical targets following fierce opposition from surplus countries such as China, Germany and Japan.

Leaders of the Group of 20 advanced and emerging economies will later Thursday start a two-day summit set to be dominated by disputes over foreign exchange rates and trade imbalances.

Merkel also called for leaders to take a strong stance against trade protectionism.

“We have to do everything to avoid protectionism. So we have to send a signal from the summit that we finally get into the last round of Doha negotiations (on freeing up world trade),” she said.

Merkel said France, which will take over as G20 president following the Seoul summit, “is facing some hard work.”

“So far we were in a phase of dealing with the crisis, now we are facing a phase of what will the G20 be like after the crisis.”

Nations must find “reasonable exit strategies” when rolling back stimulus programmes, she said.

“It’s absolutely necessary to stick to the Toronto (G20 June summit) goal of slashing deficits in half by 2013,” Merkel said.

“Fiscal credibility does not have to hinder growth but can actually enhance growth,” she said, adding that budget consolidation is compatible with growth.

But Merkel also vowed Thursday to work with US President Barack Obama on Afghanistan and the world economy, despite her earlier criticism of Washington’s economic policy.

Merkel said she would use a meeting with Obama before a G20 summit was to begin “to send a signal, really good signal,” for global growth.

“Only together will we be able to tackle the crucial problems of the world today, problems and issues such as Afghanistan, the upcoming NATO summit meeting and also obviously issues of the G20,” she said, hours before the summit was to get under way.

Obama said he and Merkel have much to discuss on issues such as Afghanistan.

“On economic issues as G20 members, but also as two of the world’s largest economies, making sure that we continue with a balanced and sustainable growth that all of us seek,” he added.